1250
In 1943 the Montreal Locomotive Works started mass production of the Sexton Artillery, developed on the basis of RAM II. A total of 2150 vehicles were produced by 1945, of which 125 were designated as Sexton I.

In 1943 the Montreal Locomotive Works started mass production of the Sexton SPG, developed on the basis of RAM II. A total of 2150 vehicles were produced by 1945, of which 125 were designated as Sexton I.

- A second issue is the low experience point generation. This tank does not have a XP gain modifier like most Premium tanks - the XP generation is the same as the non-Premium Sexton II. This noticeably limits the rate you can train crew and dramatically reduces its usefulness to train high-tier SPG crew. 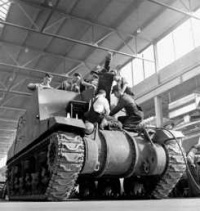 Retrieved from "http://wiki.wargaming.net/en/index.php?title=XBOX:GB78_Sexton_I&oldid=219342"
Categories:
Your location:
To log in, select the region where your account is registered
CIS Europe North America Asia
Or use Microsoft Login to enter WoT XBOX ecosystem
Log in