127000
A light, low-profile tank destroyer designed according to General Heinz Guderian's specifications. The Hetzer was produced from April 1944 to May 1945, with a total of 2,584 vehicles manufactured.

The Hetzer is a German Tier IV Tank Destroyer.

The Jagdpanzer 38(t), also known as "Hetzer", was the light Tank Destroyer successor of the Marder III, and represented a more cost-effective vehicle than it's more capable brethren, the Jagdpanzer IV, Jagdpanther, and Jagdtiger. The Hetzer saw combat mainly in Russia, German held territory, and France, and were produced from April 1944 to May 1945, with a total of 2,584 vehicles manufactured.

The Hetzer is a dramatic change from the simpler open-top design of the Panzerjager and Marder vehicles, as it features a fully enclosed, and heavily sloped superstructure. Though having a poor stock grind, the Hetzer truly comes alive once fully upgraded, and is one of the most lethal tanks in it's Tier.

The Hetzer leads to the StuG III.

Do not be dissuaded by the stock grind, once you get through it and are fully upgraded, the Hetzer becomes arguably one of the most powerful Tier IV vehicles.

Due to the limited View Range, power of the 10,5cm L/28, and the strength of your frontal armour, the Hetzer should be played up close to the front line, staying behind the Heavies. Keep your frontal armour faced towards your enemies as much as you can, and where possible, hide the lower glacis. Most Tier III and IV opponents will struggle to get through the front of your tank, so play that to your advantage. Due to your gun being placed to right of center, use cover in such a way that only the right side of your tank is visible to the enemy. What this will do is decrease the surface area of the tank that can be shot at, and will greatly increase the chance of a bounce due to the strength of the gun mantlet, all the while allowing you to shoot with much greater safety.

Once you have the 10,5cm L/28, put it to good use and actively hunt down other tanks. Do not play passively with it, as it is far too potent of a gun at this tier to waste in the back. It will OHKO (One Hit Knockout) all Tier III and IV tanks on a penetrating shot with a High Explosive round, and will OHKO a good number of Tier V tanks as well. Even when not getting a penetrating hit, few tanks in your tier range will be able to last more then a couple shots against it. When using the 10,5cm, use only HE rounds and ideally have a few Premium rounds available for use against Tier V and VI opponents.

Be mindful of your weak side and rear armour, and the fact that you are a turretless TD. Keep enemies at a distance, and try not to let them get around you, otherwise thy can track you and easily destroy you.

All in all, this tank can be a real pleasure to use thanks to the great frontal armor and the power of the 10,5cm L/28. 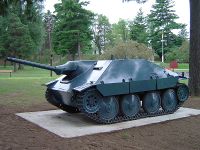 JPz 38(t) in museum at CFB Borden in Ontario, Canada

The Jagdpanzer 38(t) (Sd.Kfz. 138/2), later known as Hetzer ("baiter"), was a German light tank-destroyer of the Second World War based on a modified pre-war Czechoslovakian Panzer 38(t) chassis. The project was inspired by the Romanian "Mareşal" tank destroyer.

The name "Hetzer" was, at the time, not commonly used for this vehicle. It was the designation for a related prototype, the E-10. The Škoda factory (for a very short period) confused the two names in its documentation, and the very first unit equipped with the vehicle (for a few weeks) applied the incorrect name until matters were cleared. However, there exists a memorandum from Heinz Guderian to Hitler incorrectly claiming that an unofficial name, Hetzer, had spontaneously been coined by the troops. Post-war historians, basing themselves on this statement, made the name popular in their works. The vehicle was never named as such in official documents.

Hetzer on display in the Royal Military Museum, Brussels

The Jagdpanzer 38(t) was intended to be more cost-effective than the much more ambitious Jagdpanther and Jagdtiger designs of the same period. Using a proven chassis, it avoided the mechanical problems of the larger armored vehicles.

It was better armored than the earlier Panzerjäger Marder and Nashorn with a sloped armor front-plate of 60 mm, sloped back at 60 degrees from the vertical (equivalent in protection to about 120 mm), carried a reasonably powerful gun, was mechanically reliable, small, and easily concealed. It was also cheap to build. The Jagdpanzer 38(t) succeeded the Marder III (based on the same chassis) in production from April 1944: about 2,584 were built until the end of the war. The older Marder III Panzerjager-series retained the same vertically-sided chassis as Panzer 38(t). In the Hetzer, the lower hull-sides sloped slightly to increase the available interior space and enable a fully-enclosed fighting compartment. Because of the fully enclosed armor, it was 5 tons heavier than the Marder III. To compensate for the increased weight, track shoe width was increased from 293 mm to 350 mm. Additionally, in late 1944, Guderian ordered the petrol engine replaced by a 190hp air-cooled Tatra Type 928 diesel engine, a result of Germany's rapidly diminishing supply of petrol fuel. This change was not immediately implimented to prevent disruption of production, but by spring 1945, Tatra diesel-powered Hetzers were emerging from factories.

The Hetzer equipped the Panzerjägerabteilungen (tank-destroyer battalions) of the infantry divisions, giving them some limited mobile anti-armor capability. After the war, Czechoslovakia continued to build the type (versions ST-I and ST-III for training version: about 180 units built) and exported 158 vehicles (version G-13) to Switzerland. Most vehicles in today's collections are of Swiss origin.

By order of Adolf Hitler in November 1944, a number of Jagdpanzer 38(t)s were refurbished straight from the factory with a Keobe flamethrower and accompanying equipment instead of the normal gun. The flame projector was encased in a metal shield reminiscent of that of a gun barrel, and easily prone to damage. Less than 50 of these vehicles, designated Flammpanzer 38, were completed before the end of the war, but they were used operationally against Allied forces on the Western Front. Further variants were a Hetzer carrying the 150 mm sIG33/2 Howitzer, of which 30 were produced before the end of the war, and the Bergepanzer 38(t)Hetzer, a light recovery vehicle of which 170 were produced. Plans were made to produce other variants, including an assault-gun version of the Hetzer carrying a 105mm StuH main cannon, and an anti-aircraft variant mounted with a flak turret. The war ended before these proposed models were put into production.

Hetzer on the front

The Jagdpanzer 38(t) fitted into the lighter category of German tank-destroyers that began with the Panzerjäger I, continued with the Marder series, and ended with the Jagdpanzer 38(t). The 75 mm gun fitted on the Jagdpanzer 38 (t) was a modified 75 mm Pak 39 L/48, very similar to the late Panzer IV marks. The 75 mm kwk 40 L/48 could destroy nearly all allied tanks in service at long ranges, and its fully-enclosed armor protection made it a safer vehicle to crew than the Marder II or Marder III series. The Jagdpanzer 38(t) was one of the most common late-war German tank-destroyers. It was available in relatively large numbers and was generally mechanically reliable. Also, its small size made it easier to conceal than larger vehicles.

Like some other late-war German SPGs, the Hetzer mounted a remote-control machine gun mount which could be fired from within the vehicle. This proved popular with crews, though to reload the gun, a crewmember needed to expose themselves to enemy fire.

Its main failings were comparatively thin armor, limited ammunition storage, as well as torsion-bars and drive wheels that were prone to failure due to the increased weight of the Hetzer body on the Type 38 (t) suspension.
click to read more...

Germany
Tank Destroyers
ja:XBOX:Hetzer
Retrieved from "http://wiki.wargaming.net/en/index.php?title=XBOX:Hetzer&oldid=217343"
Categories:
Your location:
To log in, select the region where your account is registered
CIS Europe North America Asia Republic of Korea
Or use Microsoft Login to enter WoT XBOX ecosystem
Log in