405000
The vehicle was intended as a replacement for the M3 Stuart. The M24 entered service in September 1943. They were produced at Massey-Harris and General Motors factories until July 1945, with a total of 4,731 vehicles manufactured.

The M24 Chaffee is considered a very good tank and is like a smaller and faster version of the M26 Pershing. It has one of the best guns for a tier 5 tank because of it's high pen and decent damage ratio, packing even more of a punch than the M4A3E8's. Since patch 8.7 it is the last remaining tank of the three end-of-line light tanks yet to be rebalanced, re-tier or removed.In comparison, it is essentially a better than the T21 having slightly better overall stats, however the M24 Chaffee will see up to battle tier 11 while the T21 will only see up to battle tier 9. It doesn't excel as a super speedy scout like its former Soviet counterpart, as it only reaches 56 kph, and its hull traverse is slower as well. However, it has the farthest view range among all tanks up to tier 6 and its gun can penetrate the sides of tier 8 and 9 heavy tanks. The armor on the Chaffee is thin, with only the gun mantlet providing any protection at all, but that is expected with most light tanks. Overall, it is a very balanced tank and can be played like a very fast and low armored medium tank, and can take on the scouting role if there is no better tank to do so, but it is not recommended since the Chaffee has a large silhouette for a scout tank, making it easier to hit. It can also take out artillery easily with its high DPM, good accuracy, and maneuverability. It is best used for harassing and damaging enemy vehicles, and then moving behind cover, or sniping, especially in city maps or with maps with a lot of cover.

The Chaffee has great potential in fighting other tanks thanks to its 76 mm Gun T94 - which is even superior to the 76mm used by the M4A3E8 Sherman. Thanks to its high agility and speed, the Chaffee can hold its own even against some tier 8 heavies in close quarters when used correctly. Experienced tankers will enjoy using this tank to harass and pick off stragglers. Despite its top speed of 56 KPH, it is quite slow in comparison to other light tanks, because of this the Chaffee isn't as well suited to arty-raiding. Its large turret is relatively slow at turning and makes the Chaffee a larger target than other light tanks. Still, the Chaffee is a fun tank to drive. It can be thought of as a smaller and faster version of the M26 Pershing in turns of play style.

Nicknamed by some as the Mini Patton this tank has one of the best gun of all the scouts. Its high rate of fire coupled with a penetration that can penetrate almost any tank with ease make it a perfect dog fighter, the Chaffee can decimate targets in a matter of seconds and is a scout to be counted with. The spotting range of the Chaffee is exactly the same as most top tier heavies making this tank a perfect stationary target designator. One of the things that should be noted as well is the accuracy of the gun which is a stunning 0.39 meter, even better this is the only light tank that can mount a vertical stabilizer at this tier, so it will hit targets accurately on the move.

- Having good equipment in the Chaffee is important. You have no armor but you have good view range and good gun. You Should equip Binocular Telescope (which will take the view range up to a whopping 500m), Improved Ventilation Class 1 and Vertical Stabilizer Mk I.

- If you play as TD, then you should have Improved Ventilation Class 1, Vertical Stabilizer Mk I and Enhanced Gun Laying Drive. However, this isn't the recommended choice as the aiming time/accuracy on the gun is already quite good; additionally the Coated Optics is a vital piece of this tank. 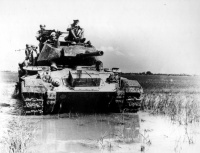 These two volumes are widely regarded as the definitive reference works on the American Light Tanks. Volume-1 covers the real life counterparts of the in-game light tanks: T1, T2/M2, M3, and M5 series and the T21 and the M24.

Retrieved from "http://wiki.wargaming.net/en/index.php?title=XBOX:M24_Chaffee&oldid=214724"
Categories:
Your location:
To log in, select the region where your account is registered
CIS Europe North America Asia
Or use Microsoft Login to enter WoT XBOX ecosystem
Log in