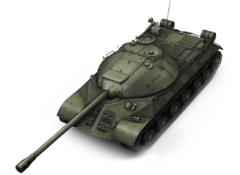 2568500
Mass production of the vehicle started in May 1945. On September 7,1945, IS-3 tanks took part in the Allied Victory Parade through Berlin. A total of 1170 vehicles were manufactured by the end of 1946, when production was canceled. From 1948 through the late 1950s, the tanks underwent a number of modernization refits.

The IS-3 is a Soviet tier 8 heavy tank

The IS-3 has more agility and speed than the German Pz.Kpfw. Tiger II, and finds itself at home engaging in close-quarters combat. While not having as thick of frontal hull armor as its German counterpart, it more than makes up for this because it is sloped and has agility. The front of its upgraded turret is also very armored and sloped, making it difficult to penetrate, and has small weak points. However, it cannot use that to hull down very well because it is small and lacks gun depression. The IS-3 is also a devastating tank up front when it is equipped with its top gun, with high alpha damage and penetration.

Low profile, sloped armor, speed and high damage make this tank very useful in all situations, particularly in urban and close-range combat. At this tier the once-fearsome 122 mm D-25T bounces off enemy armor more frequently, so try to get side shots when you can until you can research the BL-9. The upgraded BL-9 gun wreaks havoc on tier 9 tanks and below, although it won't always pen the front of other heavily armored tier 8 tanks. The Gun Laying Drive and Vertical Stabilizer are reasonably effective, but taking more than the occasional potshot beyond 300m is not recommended. Angled properly, the IS-3's armor will consistently bounce shots from other tier 8's and below, especially from the front. It requires no frontal angling because of its frontward-angled "pike" front plate; counter-intuitively, trying to angle it further will ruin it. Instead, point the tank straight at the enemy & close the range to hide and/or increase the angle of your lower glacis. Be careful about closing inside 50m, as the center turret roof panel is extremely prone to overmatch, especially at very close range against taller tanks, of which there are many.

Its playing style is well-suited to aggressive force leading and peek-a-booing. The IS-3 will find itself at home on urban maps and other maps that allow it to take cover and move to get close to its target. A semi-hull-down position works well in the midrange, covering the vulnerable lower glacis and forcing shots to be taken on the effective frontal armor or extremely hard-to-penetrate turret. Thanks to its spaced side armor, it often takes non-damaging shots on the sides, but the tracks tend to get damaged often.

Contrary to popular belief, the little hole on the front of the the turret is not a weak-spot, the tracks are very good at eating shots, and the sides and corners have spaced armor, thus making them areas where you will shoot but almost certainly do no damage whatsoever.

The Iosef Stalin 3, also known as the Joseph Stalin 3 had improved armor layout, and a hemispherical cast turret (resembling an overturned "soup bowl") which became the hallmark of post-war Soviet tanks. While this low, hemispherical turret may have made the IS-3 better protected, it also imposed severe penalties inside the tank by significantly diminishing the working headroom, especially for the loader (Soviet tanks in general are characterized by uncomfortably small interior space compared to Western tanks). The low turret also limited the maximum depression of the main gun, since the gun breech had little room inside the turret to pivot on its vertical axis. As a result, the IS-3 was less able to take advantage of hull-down positions as Western tanks. The IS-3's pointed prow earned it the nickname Shchuka (Pike) by its crews. It weighed slightly less than the IS-2 and stood 30 cm lower.

The 122mm A19 main gun was an established field gun as a towed howitzer and not only offering a capable armour piercing capacity at short ranges, it offered a superior bunker bashing capability thanks to the High Explosive rounds it fired. The 122m A19 had been around since the 1930’s and had an established manufacturing infrastructure behind it, which also supported the decision to adopt it as the main gun. Also known as the D25-T, it used Separate Loading ammunition, which limited the amount of shells carried to 28. The HE round or Armour piercing round was loaded in to the breach and then the combustible charge was loaded after, at which point the breach was closed and the gun fired. Two 7.62mm and one 12.7mm MG’s were used as secondary armaments.

The D25-T had an unfortunate tendency to explode, and its gun tube had a relatively short life. During trials on the A19's muzzle brake, the tube exploded, seriously injuring Marshall Kliment Voroshilov in the process; this led to protests against further development of the A-19, but Joseph Stalin intervened and insisted the A-19 be fielded regardless. The 122/40 D25-T also had a short tube life; approximately 200 rounds could be fired out of the main gun before the gun barrel wore out.

The IS-3 came too late to see action in World War II. Though some older sources claim that the tank saw action at the end of the war in Europe, there are no official reports to confirm this. It is now generally accepted that the tank saw no action against the Germans, although one regiment may have been deployed against the Japanese in Manchuria.

In post-war conflicts, the IS-3 saw combat with the Soviet Army during the 1956 invasion of Hungary, and the Prague Spring in 1968.

Starting in 1960, the IS-3 was slightly modernized as the IS-3M, in a manner similar to the IS-2M. The Egyptian Army acquired about 100 IS-3M tanks in all from the Soviet Union. During the Six Day War, a single regiment of IS-3M tanks was stationed with the 7th Infantry Division at Rafah; the 125th Tank Brigade of the 6th Mechanized Division at Kuntilla was also equipped with about 60 IS-3M tanks.

Israeli infantry and paratrooper units had considerable difficulty with the IS-3M when it was encountered due to its thick armour, which shrugged off hits from normal infantry anti-tank weapons such as the Bazooka. Even the 90 mm AP shell fired by the main gun of the Israeli Defense Force (IDF) M48 Patton tanks could not penetrate the frontal armour of the IS-3s at normal battle ranges. However, due to the IS-3's much thinner flank armor, Israeli Patton and Centurion Tanks had little trouble penetrating the sides of the IS-3 tanks. Captured tanks were subsequently used by the Israeli army as static artillery pieces.
click to read more...

Retrieved from "http://wiki.wargaming.net/en/index.php?title=Blitz:IS-3&oldid=234244"
Categories:
Your location:
To log in, select the region where your account is registered
CIS Europe North America Asia
Or use Microsoft Login to enter WoT XBOX ecosystem
Log in