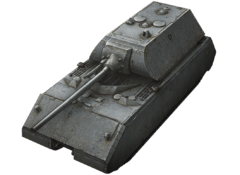 6100000
Developed from June 1942 through July 1944, with two prototypes produced, only one of which received a turret and armament.

The Maus is a German tier 10 heavy tank.

Developed from June 1942 through July 1944, with two prototypes produced, only one of which received a turret and armament.

The biggest and heaviest tank in World of Tanks Blitz, the Maus is certainly a mammoth tank and with the most hit points in the game (2500), it should never be fought alone, unless you are in a tank such as the T62. Boasting some of the thickest armor in the game, if your tanks gun lacks penetration above 225, fighting this tank will not go well. Lack of sloping anywhere on the tank except the frontal armor can allow tanks with adequate penetration to get through your side and rear armor with ease. Key weaknesses in the frontal armor include the the lower glacis plate and "mud flaps." Another weakness when fighting this tank from the front is shooting at its turret cheeks but this is impossible to do if the driver turns his turret away and angles the armor. All of these weaknesses can be negated simply by positioning your tank in a way that all incoming fire comes in at an angle or sidescraping, such as described above. The 12.8cm main gun is similar to the IS-7 doing the same amount of damage but sacrificing penetration for better accuracy. The maneuverability of the Maus is what you would expect out of super heavy tank, slow and cumbersome, which makes it prime to being circled by mediums or heaviums. Another weakness of being the biggest and baddest tank on the battlefield is you'll be attracting a lot of enemy fire so be patient and use this to your advantage, soaking up hits for your friendlies and angling/sidescraping and bouncing shots.

The Maus marks the end of its German heavy line.

Describing the Maus as a slow super heavy tank barely does it justice. The thick armor, poor maneuverability, and mediocre gun make the Maus more about preventing and soaking up damage than dealing it. Maus drivers should attempt to secure choke point areas on the map and force enemy tanks to relocate to less favorable positions. The extraordinarily thick side armor makes this tank the undisputed king of sidescraping. Though like it's cousin E100, the Maus' cheeks are very vulnerable and when sidescraping, the turret should be pointed in the direction of the hull during reload.

While the Maus is exceptional at holding a position via sidescraping, its' poor maneuverability means it cannot succeed alone. Maus drivers should take care to avoid engaging the enemy by themselves and always travel with the team. Though difficult in Blitz, pre-battle communication is almost required when driving a Maus to prevent being left alone, flanked and destroyed.

Panzerkampfwagen VIII Maus was a German World War II super-heavy tank completed in late 1944. It is the heaviest fully-enclosed armored fighting vehicle ever built. Only one complete prototype was built before the testing grounds were captured by the advancing Soviet forces. That single complete prototype unit underwent trials in late 1944. It was 10.2 meters long, 3.71 meters wide, and 3.63 meters tall. Weighing 200 metric tons, the Maus' primary weapon was a 128 mm KwK 44 gun (55 calibers long barrel), based on the 12.8 cm Pak 44 anti-tank artillery piece, with a coaxial 75 mm gun. The 128 mm gun was powerful enough to destroy any enemy armored fighting vehicle at close or mid-range, and even some at ranges in excess of 3500 meters. The principal problem in development of the Maus was finding an engine powerful enough for its weight that could fit the tank. Though the design called for a maximal speed of 20 kilometers per hour, no available engine was able to accelerate the prototype to more than 13 kilometers per hour, even in perfect conditions. The weight of the tank also made it unable to cross most bridges, although it still could ford, or submerge and use a snorkel to get across a river.

Remotely controlled demo model presented to Adolf Hitler and his staff in 1943.

The basic design known as the VK7001/Porsche Type 205 was presented to Adolf Hitler by Ferdinand Porsche in June 1942 and was subsequently approved. The design up to then had been the culmination of work done by Porsche, who had won the contract for the heavy tank that March. Work on the design began in earnest; the first prototype, to be ready in 1943, was initially christened Mammut (Mammoth). This was reportedly changed to Mäuschen (Little Mouse) in December 1942, and finally, to Maus (Mouse) in February 1943, which became the most common name for this tank. Its ordnance inventory designation was SdKfz 205.

From the very beginning Maus was designed to use the "electric transmission" design which Ferdinand Porsche had used in his unsuccessful attempt to win the production contract for the Tiger. The initial prototypes used a gasoline engine (the later ones were to use a diesel engine) that powered a massive electrical generator; together, they occupied the entire central rear two-thirds of the Maus' hull, thus disallowing direct access from forward driver's compartment in the hull to the turret. Each meter-wide track, which used the same basic "contact shoe" and "connector link" design format as the Henschel-built King Tiger, had its own electric motor mounted in the rear of the hull; the tracks had no mechanical connection to the internal combustion engine that powered the Maus. Due to the uniquely wide tracks used (1100 mm each), there was a narrow lengthwise "tunnel" inside the hull under and to the rear of the turret to house the engine and generator of the tank's power-train.

The initial plan for the Maus called for the completion of the prototype by the summer of 1943, with monthly production scheduled to run at five vehicles per month once the prototype has been delivered. The work on the Maus would be divided between Krupp, responsible for the chassis, armament and turret, and Alkett, who would perform the final assembly.

The Maus tank was originally designed to weigh approximately 100 tons and be armed with a 128 mm main gun and a 75 mm co-axial secondary gun. Additional armament options were researched into, including various versions of 150 mm and 128 mm guns. In January 1943, Hitler himself insisted that the armament should consist of a 128 mm main gun with a coaxial 75 mm gun.

By May 1943, a wooden mockup of the final Maus configuration was completed and presented to Hitler, who approved it for mass production, ordering a first batch of 150. At this point, the estimated weight of the Maus reached 188 tons. However, an anecdote suggests that Hitler claimed that the 128-mm gun looked like a ´toy gun´ in comparison with the tank, demanding it to be replaced by a 150-mm gun.

In his book Panzer Leader, Heinz Guderian writes: "On May 1, a wooden model of the Maus, a tank project of Porsche and Krupp, was shown to Hitler. It was intended to be equipped with a 150 mm gun. The total weight of the tank was supposed to reach 175 tons. It should be considered that after the design changes according to Hitler's instructions, the tank's weight would approach 200 tons. The model didn't have a single machine gun for close combat, and for this reason I had to reject it. It had the same design flaw that made the Ferdinand unsuitable for close combat. In the end, the tank will inevitably have to wage close-combat since it operates in cooperation with the infantry. An intense debate started, and except for me, all of the present found the "Maus" magnificent. It was promising to be exactly that, a "giant"".

Development work on the Maus continued, but in October 1943, Hitler cancelled the order, which was followed in November by the order to cease development of the Maus altogether, but to continue the construction of the prototypes.

The first, turret-less prototype (V1) was assembled by Alkett in December 1943. Tests began the same month, complete with a dummy turret of the same weight as the real one. The principal problem with the Maus that were discovered in this test was its power-to-weight ratio. No existing engine was powerful enough to drive it at speeds anywhere near the 20 km/h demanded by the design specifications. The modified gasoline-fueled Daimler-Benz MB 509 engine used in the prototype was only able to propel it at 13 km/h, and only under perfect conditions. The suspension used by the Maus also had to be adjusted to enable it to bear the tank's weight. Another issue found was that the Maus was simply too heavy to cross bridges. As a result, an alternative system was developed, where the Maus would instead ford the rivers it needed to cross. Due to its size, it could ford relatively deep streams, but for yet deeper ones it had to submerge and drive on the bottom of the river. The solution required tanks to be paired up: a stationary Maus would supply electrical power to the crossing vehicle over a cable until it reached the other side. The crew would receive air through a large snorkel, long enough for the tank to submerge up to 13 meters.

In March 1944, the second prototype, the V2, was delivered. It differed in many details from the V1 prototype. In mid-1944, the V2 prototype was fitted with a powerplant and the first manufactured Maus turret. This turret was fitted with a 128 mm KwK 44 L/55 gun, with coaxial 75 mm KwK 44 L/36.5 gun and a 7.92 mm MG34 for anti-aircraft armament. The V1 prototype was supposed to be fitted with the second manufactured turret, but this never happened. By July 1944, Krupp was in the process of manufacturing four more Maus hulls, but they were ordered to halt production and scrap these. Krupp ceased all work on it in August 1944. Meanwhile, the V2 prototype entered tests in September 1944, fitted with a Daimler-Benz MB 517 diesel engine, new electric steering system, and a Skoda Works-designed running gear and tracks. A special railroad car was made to transport the Maus prototypes. An anti-aircraft version of the Maus - the Flakzwilling 8.8 cm Auf Maus with two 88-mm guns in a special turret was being designed, but the project never left the blueprint stage.

It took six 18t half-tracks to salvage the turret from the destroyed V2 prototype
The operational Maus prototypes remained at Kummersdorf and at the proving grounds in Böblingen. In the last weeks of the war, the V1 with the dummy turret was captured by the advancing Soviet forces in the vicinity of the western batteries of the Kummersdorf artillery firing grounds. It had been thought to be mechanically sabotaged by the Germans before abandoning it. Some sources state that the Panzerkampfwagen VIII saw combat while defending the facility at Kummersdorf, although the popular version is that it did not. The Soviet Commander of Armored and Mechanized troops ordered the hull of V1 to be mated with the turret of V2. The Soviets used six 18t German half-tracks to pull the 55-ton turret off the burned-out hull. The combined V1 hull/V2 turret vehicle was completed in Germany and sent back to the USSR for further testing. It arrived there on May 4, 1946. When further testing was completed, the vehicle was taken over by the Kubinka Tank Museum for storage where it is now on display. It appears that the capture of this prototype had little impact on post-war Soviet tank development. Soviet tank design continued to concentrate on maneuverability by strictly limiting size and weight. The next-generation Soviet tanks had similar levels of protection and armament: the IS-3 heavy tank was armed with a 122 mm gun, but weighed under 50 tons; the T-54 main battle tank, which entered production in 1947, provided 200 mm of frontal turret armor, 100 mm of frontal hull armor and a 100 mm main gun, while weighing in at slightly less than 40 tons.

Retrieved from "http://wiki.wargaming.net/en/index.php?title=Blitz:Maus&oldid=230182"
Categories:
Your location:
To log in, select the region where your account is registered
CIS Europe North America Asia
Or use Microsoft Login to enter WoT XBOX ecosystem
Log in