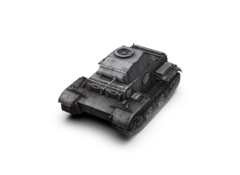 This tank was made available through the in game store on Black Friday in 2015, and could be purchased in a $15.99 bundle with just the tank, some gold, and a slot, or in the 49.99 Black Friday bundle. It has also been given away through various community contests and giveaways

Though many seem to see the Ausf. J as a fun-tank, it can become a deadly weapon in tier III matches. With a great armor of 80/50/50, it will be hard for your enemies to penetrate you. You won´t do much damage, but you can spot and take the damage for your teammates, while they, especially TD's and artillery can shoot safely from behind positions. Using APCR allows you to deal with enemies much more effectively, though it becomes expensive very quickly.

Retrieved from "http://wiki.wargaming.net/en/index.php?title=Blitz:PzII_J&oldid=242490"
Categories:
Your location:
To log in, select the region where your account is registered
CIS Europe North America Asia Republic of Korea
Or use Microsoft Login to enter WoT XBOX ecosystem
Log in