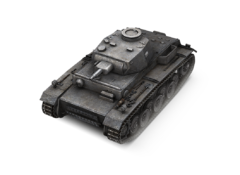 410000
An order for developing the vehicle was placed on September 9, 1939. Over the course of its development, Henschel engineers actively used elements of the D.W. II project. The first two prototypes were ready in March 1942; another two were built by October the same year. Hulls of the prototypes underwent trials at the plant proving ground. After the trials, two prototypes were converted into heavy tank destoyers. Six turrets manufactured by the Krupp company were placed at the Atlantic Wall.

This tank is slow for a tier 5 heavy and the rather weak armor doesn't help, giving this tank low survivability in close-combat encounters. Also, to be able to mount the 7.5cm Waffe gun, the turret has to be upgraded, but this will decrease the agility and drive-performance of the tank due to the added weight and the slower traverse speed. This tank is recommended for mid-range encounters, as the relatively accurate and powerful 7.5cm Waffe proves extremely effective against even tier 7 tanks. Just make sure you have backup. This tank is a very good for learning more advanced defensive tactics (hulldown, sidescraping) that will help throughout the whole line, as simple armor angling will not help you survive in this tank.

Because of its weak and generally unsloped hull armor, this tank should be played as a sniper, preferably hull-down. Playstyle can be compared to Tiger, VK 30.02 (M) or Panther, and this tank will prepare you for future German tanks. Aside from the howitzer, there is really no reason to use anything but the Waffe as it outclasses all the other guns. However unlocking them all at tier 5 will make future grinds in the German line much easier. Because of the terrible hull armour and easily hit engine, it is essential that you learn to fight hulldown or sidescrape as much as possible. These tricks are essential throughout the entire German heavy line, and really any heavy tank in the game.

For players that favor close-ranged combat, the 10.5cm gun is a good option with its high damage output per shell. However you will have to deal with the cons of this vehicle in order to use this gun effectively. This gun can be used to good effect in urban environments with ranges limited from 50 to 100 meters. Just be sure to aim for the weak spots and have some support when reloading. Also, if you do use the howitzer, DO NOT FIRE AP AMMO! It is a waste of your time and money because with HE ammo, at least you can deal splash damage even if you do not penetrate. This tank also has the ability to at least give enemies pause before attacking. Due to the large number of guns, most enemies will stop to see what gun you are carrying. ("Does he have the howitzer or the Waffe?"). This may give you a chance to get the first shot off in an encounter.

VK 30.01(H) prototype during tests. Note the concrete rings to simulate the weight of the turret.jpg

VK 30.01 (H) is a further development of the Durchbruchswagen concept. The DW vehicles (DW1 and DW2) were – as their name in German suggests – attempts to create a breakthrough tank (in other words, essentially a heavy tank). On September 9, 1938, it was decided to continue with the DW 30 ton category development. On January 1, 1939, Krupp decided that the new vehicle should be equipped with a 75mm L/24 cannon, the crew should be equal to that of Panzer IV and the tank should have 50mm armor all around. On January 31, 1939, this new vehicle program was renamed to Panzerkampfwagen VI (7,5cm), but the new experimental designation for it was VK 30.01 (experimental/tracked vehicle, 30 tons, 1st prototype). At the same time, the old DW projects were renamed to VK 30.01 (Alte Konstruktion), while the new VK 30.01 was referred to as “Neue Konstruktion” (new design).

Design-wise, it was a classical German tank, with typical Henschel suspension that would eventually evolve into the Tiger suspension via VK 36.01. The roadwheels had torsion bar suspension.

3 prototypes were ordered. The hulls were made by Krupp in Essen and delivered to Henschel in Kassel for final assembly in 1940. Turrets were also ordered and Krupp was supposed to deliver them in 1940. However, these came later and most likely were never installed on any prototype machines. The three prototypes instead had a concrete cube installed instead of the turret to simulate the turret weight. The vehicles were equipped with 300hp Maybach HL116 engines and their maximum road speed was 35km/h.

On January 30, 1942, based on the preliminary tests (which did not show the vehicle in a very positive light), it was decided to reduce the amount of the 0-series tanks being built to only 4 vehicles, which were built in March (2 vehicles) and October 1942 (another 2). These tanks were sent to training units and were used for crew training.

The armament (which was still the 75mm L/24, quite insufficient for the 1942 battlefield) was also discussed – Krupp proposed on October 7, 1941 the following options to the Waffenprüfamt 6:

WaPA 6 responded in the sense that they would like the 75mm KwK 40 L/43 to be installed. Krupp replied that in order to do that, either the gun would have to be modified, or the turret would have to be bigger. In January 1942, the re-arm project was scrapped.

The remaining machines were used for crew training and testing various equipment until the end of the war, when they were scrapped.
click to read more...

Retrieved from "http://wiki.wargaming.net/en/index.php?title=Blitz:VK3001H&oldid=224317"
Categories:
Your location:
To log in, select the region where your account is registered
CIS Europe North America Asia Republic of Korea
Or use Microsoft Login to enter WoT XBOX ecosystem
Log in