Difference between revisions of "Maps (Blitz)"

Maps have different characteristics of size, design, terrain, location, weather and land leveling. Each map offers different tactics to different tanks. Use these tactics as an advantage for you to conquer the maps.

General Tactic- NEVER GO ALONE, you will die almost instantly and really annoy your team. Capturing the Base (caping) is useless, unless there is one person left on the other team who runs and hides. You will get more XP by fighting and doing damage and dying and losing to a base cap, than sitting in the base and doing no damage and winning form a base cap.

Black Goldville is a desert map with a hilly cave system in the northwest, and town in the southeast. Heavies with good gun depression can fight at the caves, while heavies without good gun depression can fight it out in the town. Mediums can either flank through the town, push the large stone column in the caves, or go hull down near the middle of the map in the hilly section. TDs should either snipe and support the heavies in the caves or town, or play to their specific strengths.

This new map came from the new update;1.6.9. On the East side is a wind mill. This is a place where heavies come to fight. On the West side id=s a good vantage position for TD's or mediums. In the middle is the base which can be accessed by 2 pieces of land and 2 bridges. There are 2 rivers which are deadly if you go in them as you may drown in the deep sections and you are an easy picking for enemy tanks. BEWARE OF THE RIVERS. 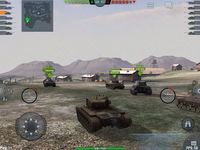 Copperfield is a desert type map, consisting of a high ring around the edge, with a valley in the middle. The heavies usually engage at the top hill, near the spawn, while mediums usually fight at the lower edge of the map. Tank Destroyers do not excel at this map, the well armored ones can join the heavies (ex. T95), while the quick, agile ones can join the mediums (ex. Hellcat).

Dead rail is a winter map that includes a raised hill to the east, a town in the center, and a low-lying hilly section to the west. The capture circle is in the middle of a large grouping of trains just to the west of the town, and has several trains protruding into it, providing cover. The trains to provide an interesting combat environment, as shells can travel under them to hit the tracks or lower hulls of enemy tanks, and some trains have gaps in their sides that allow tanks to fire through them. On the west, both teams have hills that provide hull-down opportunities to tanks with 9-10%+ of gun depression, or for tall tanks with less depression. 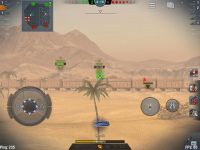 Desert Sands in a desert map, with a town on one side of the railroad tracks and dunes on the other. The heavies generally do battle in the town, while the mediums prowl the dunes. There are a couple of good sniping/ camping positions for TDs on this map, in the hills around and above each spawn. 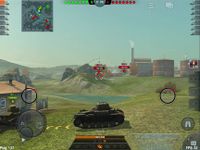 Falls creek is a town map, with a factory town on the top and some water and a bridge on the bottom. The heavies usually square off at the bridge between the two spawns and occasionally at the town. Mediums sometimes fight at the bridge, but mostly at the town. There are no good sniping/ camping locations on this map, so well armored TDs stay with the heavies and the agile ones go with the mediums. 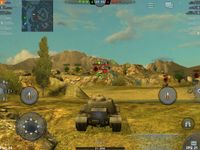 Mines is a country map with water and an island in the west, a hill in the middle and a small town in the east. The heavies can either fight near the capture circle at the base of the large, central hill, or on the right side in the small town. Mediums can rush the hill at the beginning of the battle to gain a good shot into the enemy spawn from either side, or flank using the island or the town. A lot of tank destroyer divers camp near the spawn on either side, but this is largely ineffective, as the only people they can shoot are flanking mediums or tanks on one side of the hill. Other TD drivers camp on the island, this has a shot into part of the base and part of the hill, so it is not too effective. If a TD can excess the hill, in a rush with the mediums, they hill gain a clear shot the most of the map. However, this position is hard to obtain after the initial rush as anyone attempting to make it onto the hill will be annihilated by the stand off of heavies around the base. Well armored TDs should push with the heavies, while fast TDs should ascend the hill with the mediums or flank with mediums.

Middlesburg is a town map with some hills in the east and a large town in the west. The heavies engage in street warfare in the town, ducking around corners to reload, while mediums flank or engage other mediums in the hills. Some TD drivers camp on the top of the hills, but this does you no good as all of the tanks in the town are blocked by buildings and the mediums will annihilate anyone in this exposed position. Generally the well armored TDs prowl the streets with the heavies and the agile ones flank with the mediums.

Retrieved from "http://wiki.wargaming.net/en/index.php?title=Maps_(Blitz)&oldid=220923"
Category:
Your location:
To log in, select the region where your account is registered
CIS Europe North America Asia Republic of Korea
Or use Microsoft Login to enter WoT XBOX ecosystem
Log in