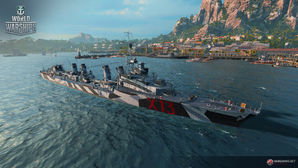 The lead ship in a series of large destroyers (contre-torpilleurs), a typical type of ship in the French Navy, designed specifically to hunt down enemy destroyers. The ship was large in size and had a high speed. She was on par with contemporary destroyers by the strength of her torpedo armament yet considerably outclassed them in terms of artillery power owing to her five 139mm guns.

Tier VI French premium destroyer Aigle is a flexible ship, capable of filling different roles as needed. As the first French destroyer in World of Warships, she sets the bar decently high with her performance. For her tier, she possesses the largest hit point pool among her peers and sports an armament that makes her a genuine threat to all classes.

There are three primary playstyles which suit Aigle well. The first is to use her as a long-range gunboat. With decent range and maneuverability, Aigle will prove to be a difficult target to hit. To excel in this role, captains will want to invest in a captain sporting the Advanced Firing Training skill and fully utilize defensive maneuvering tactics, such as altering speed and direction. However, captains may be disappointed with the number of shells it takes to do a considerable amount of damage, given Aigle’s high shell arcs and poor gun firing angles. Additionally, her stock concealment range will make it hard to sneak up on enemy ships to use her torpedoes should it become necessary.

The second option is arguably the most effective in general: a hybrid between concealment and gunnery. This build makes use of everything Aigle has to offer at the cost of firing range. Aigle can sneak around the map and choose her engagements. Her speed will allow her to effectively hunt down any ship at her tier, especially when combined with the Radio Position Finding skill. Aigle will prove to be a menace to the red team, provided her captain keeps a keen eye on the mini-map in order not to get too close to the enemy; Aigle’s speed can get her into trouble quickly.

The third build is a full-concealment build. In this setup, captains will enjoy a small stealth firing window with torpedoes that hit very hard. Again, her speed can be a blessing or a curse, because she will close range with the enemy much faster than other ships. However, with this build, she excels at contesting capture points in Domination games, or sneaking to the enemy base in Standard Battles. At the start of a battle, Aigle can reach capture points first and has the firepower to bully other destroyers. If the enemy focuses her, she can use smoke and speed to retreat and find a better position. Captains should be cautious of over-extending in matches with aircraft carriers, because Aigle’s anti-aircraft armament is very underwhelming.

Overall, Aigle is a fun destroyer to play. She poses a threat to all destroyers at her tier, though she truly excels at medium range. The key to her success is avoiding close-range engagements with other ships and utilizing her speed and maneuverability to dodge incoming gunfire at longer ranges.

As a premium ship, Aigle doesn't have any upgrades to research.

The recommended upgrades for Aigle are as follows:

Key skills for Aigle commanders include a core of Priority Target, Last Stand, Survivability Expert, and Concealment Expert. After those core skills have been taken, skills such as Basic Firing Training (increasing the rate of fire), Inertial Fuse for High Explosive shells (increases the penetration of the shells offering more damage per shot on average), Advanced Firing Training (increases the range of the main battery), and Superintendent (extra charge for consumables), will really bring out the strengths of the ship.

Aigle can equip the following consumables:

Premium version of all consumables are useful to reduce the cooldowns.

As a premium ship, Aigle comes included with Type 10 camouflage that lowers her detection radius, reduces the accuracy of incoming shells, and increases the amount of experience she earns.

Aigle should use signals that are standard for a gunboat destroyer. Flags that boost fire chance (

) are useful, as well as Juliet Charlie (

) to eliminate detonations. As Aigle is a premium ship, any and all economic flags can be useful. 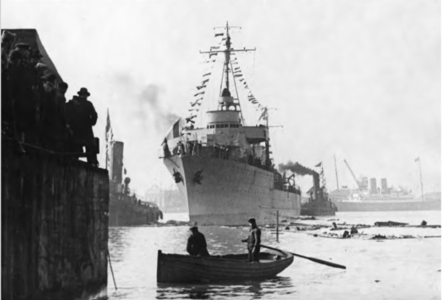 Aigle following her launch in Dunkirk, 1931.

The Aigle-class of French destroyers were a set of four (sometimes considered six, though the final two were technically of the Vauquelin-class) destroyers developed in 1927 by the Marine Nationale, with all four (and the two Vauquelin’s) being laid down throughout 1929 and 1930, launched in between 1930-31, and commissioned from 1931-33.

The Aigle-class were essentially the same as the previous Guepard-class, but adopted some minor modifications that were found on the succeeding class of the Vauquelin’s. These modifications included a slightly different hull form, higher pressure boilers that led to an increased top speed, and most importantly, an improved main armament (the 138.6/40 Mle. 1927 gun).

Compared to the previous Guepard-class, the Aigle’s featured some minor weight-savings in the form of welded non-critical sections and structures, mainly in the superstructure. Other improvements were found in the ships machinery; primarily the boilers. Even within the Aigle-class the machinery differed. The first three of the class (Aigle, Vautour, and Albatros) employed the use of Parsons turbines, while the remaining Gerfaut used turbines made by Rateau-Bretagne. During trials, most of the class achieved a speed of ~37 knots, but Gerfaut distinguished herself by achieving a speed of over 40 knots.

The second improvement of the Aigle-class over previous French destroyers was the new 138.6mm/40 Mle. 1927 gun. The main difference between this gun and the previous (Mle. 1923) version was the use of a sliding-breech, similar to those of similarly sized German guns, that effectively doubled their rate of fire.

Torpedo armament of the class consisted of two triple 550mm torpedoes mounted along the ships’ centerline. Anti-aircraft armament — like most ships of the late twenties — was extremely sparse, consisting of a single 75mm high-angle gun and four single 37mm guns. The class also mounted depth-charge racks and throwers for anti-submarine warfare.

The ships underwent a few upgrades during their careers, mainly to their anti-aircraft armament, with a few minor modifications made to their main armament, communications and ASW facilities.

However, naval action quickly ceased following the French Armistice on 22 June 1940, where Aigle and all her sister-ships returned to the Mediterranean, now flying the Vichy French flag. Aigle remained trapped in Toulon until 27 November 1942, when she was scuttled with the rest of the Vichy French Fleet stationed at Toulon to prevent capture by the Germans. She was later refloated by the Italians on 10 July 1943, but was never restored to operational capacity. She sank a second time on 24 November 1943, during an Allied air raid on Toulon. She was salvaged a second time shortly after the war's end, and was subsequently scrapped.

Ships of France
Destroyers
Retrieved from "http://wiki.wargaming.net/en/index.php?title=Ship:Aigle&oldid=270638"
Categories:
Your location:
To log in, select the region where your account is registered
CIS Europe North America Asia Republic of Korea
Or use Microsoft Login to enter WoT XBOX ecosystem
Log in