Aircrafts are the primary weapons of all aircraft carriers. The game on this class of ships mainly consists of controlling the planes, and not the ship itself. All aircrafts deployed on aircraft carriers are divided into three types of armament: torpedo bombers, bombers and attack aircrafts. There are also fighters and spotting aircrafts related to consumables, which can be present on all ship types excepting destroyers.

The aircraft carrier has three modules (types) of the aircrafts:

There is a squadron of each type on the deck of an aircraft carrier, however the amount of aircrafts varies depending on the ship itself. To increase their amount by 2 units of each type, it is necessary to install the "Flight Control Modification 1" upgrade.

If there are fewer aircraft than the maximum possible number, then the preparation of replacements begins and an aircraft appears on the deck, ready for takeoff. The preparation of attack aircraft, bombers and torpedo bombers runs parallel to each other and begins immediately after the squadron takes off. The preparation and recovery times of aircraft can be reduced by using the aforementioned upgrade (reduce the time by 5%) and the commander skill "Air Supremacy" (reduce the time by 5%), as well as get an improvement in the "Arms Race" mode (by 5% for one improvement).

It is possible to lift a new squadron into the air only in three cases:

Returning to the aircraft carrier, the planes fly along the shortest route and, after reaching a certain altitude, they do not detect anyone and become invisible to enemy squadrons and ships. They also cannot be damaged or destroyed.

Aircraft that have successfully returned to an aircraft carrier are transferred to the reserve from where they can be called again.

Aircrafts do not start the attack with the whole group, but in units. Units swap after attack is performed. In case an aircraft was shot down during the attack, it will be replaced by another one from the squadron.

Among the general characteristics of an aircraft it`s key parameters are:

Despite the fact that an aircraft carrier has aircrafts of different types, all of them can conduct reconnaissance detecting enemies at a distance at which allied ships are not able to see it. This happens because the ship's visibility radius is less than the rendering radius, see the article "Detection".

Furthermore, talents of some unique ship commanders can also reduce the preparation time for aircraft. 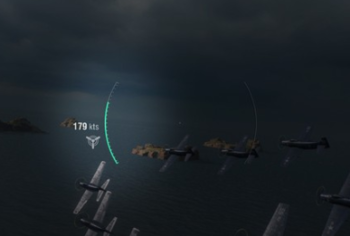 Default flight speed can be increased by 2.5% after learning the commander skill "Improved Engines".

The aircraft have a boost, which can increase the speed for a short time (press the "W" key) as follow:

Boost time and it`s full recovery time depends on the type of squadron.

can be used for immediate replenishment of the boost bar. Further, the duration of the boost can be increased by 10% with the "Improved Engine Boost" or with the "Aircraft Engines Modification 1" upgrade. However, the recovery time will also increase by the same amount (10%) in this case.

The parameter "Boost recovery rate" is responsible for the replenishment time acceleration. It´s base value amounts to 0.5 aircraft per second. This time can be improved in the "Arms Race" mode by 20 — 120% (20% for each improvement).

The aircraft speed can be decreased by pressing the "S" key as follow:

According to these details, aircraft engine could have following indication´s:

The aircraft return speed can be increased by 20% by installing the "Air Group Modification 1" upgrade.

All aircraft squadrons have following consumables:

The operating time can be increased by 50% via the "Consumable Squadron Modification 1". The reload time can be reduced by 5% using the November Foxtrot flag signal. 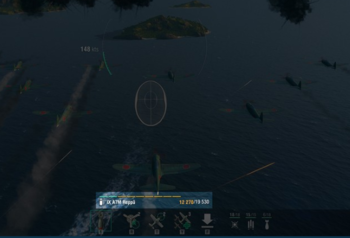 Each aircraft has it´s own HP, which can be monitored at the bottom of the screen. The HP is divided into cells, which amount is equal to the amount of aircrafts. These cells indicate aircraft capability as follow:

The combat capability can be increased by using:

By learning the "Aircraft Armor" commander skill it is possible to reduce the damage dealt from AA defenses by 10%. There is also a special version of this skill available which reduces the damage by 11.5%.

Torpedo bombers of Tier VIII and X aircraft carriers have the "Repair" consumable which restores 10% of their HP. The number of HP points can be also increased by 5% using the India Delta flag signal.

Squadron selection can be done by press "1", "2" or "3" keys. Pressing the key again will lift the selected squadron into the air. "1" will lift attack aircraft, "2" - torpedo bombers (as far as available) and "3" — bombers (key "2" if there are no torpedo bombers availablbe). The squadron will include only one type of aircraft.

The squadron's speed can be controlled by "W" and "S" keys which increase or decrease it by spending the Boost. Turns are carried out using "A" and "D" keys. For easier aiming you can also use the mouse. 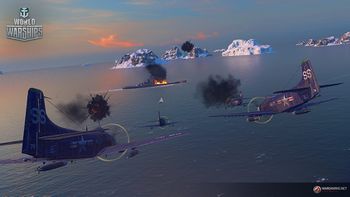 To start the attack you need to press the left mouse button and separate the aircraft unit from the squadron. Depending on the type of squadron, an ellipse will be visible for launching missiles or bombs, for attacking with torpedoes appears the torpedo sight. At this moment the sight will be colored yellow. A special timer will indicate the readiness for an attack launch. The sight will turns to green when planes are ready to attack.

Aim speed can be increased by learning the "Sight Stabilization" skill as follow:

To attack you need to click on the left mouse button again.

The correct lead plays the key role for the successful attack. It is important to take into account the size, speed and maneuverability of the enemy ship.

The rest of the squadron's planes get out of control and follow the attacking flight until the aircraft unit ends its attack. Attacking aircraft return to the carrier to replenish ammunition. Aircraft get shot down during the attack will be replaced by another aircraft from the squadron.

In case the unit not carried out it`s attack within the allotted time the unit aircraft will return to the squadron. The attack can then be repeated.

You can look around and understand what the selected target is currently doing using the overview camera. It is activated by holding press the right mouse button. In this case the aircraft will not deviate from their current course.

Bombers can carry high-explosive (HE) and armor-piercing (AP) bombs. Some aircraft can also carry not only one, but several such bombs. HP bombs can cause a fire on an enemy ship. AP bombs can pierce the deck at a certain angle, otherwise, they will ricochet. AP bombs are mainly the feature of German and Japanese aircraft carriers with rare exceptions of some premium ships — Enterprise, Kaga, Erich Loewenhardt.

Attack aircraft are armed with unguided rockets. These projectiles are very effective against lightly armored shipsand are fairly easy to use. Rockets also available in two types: HE and AP. AP rockets are represented only on German aircraft carriers, except of Graf Zeppelin. The strike concept of rockets has the same similarities with bombs and ship shells — HE cause fires, while AP are capable to knocking out ship citadels. They also have disadvantages typical for these types of ammunition. 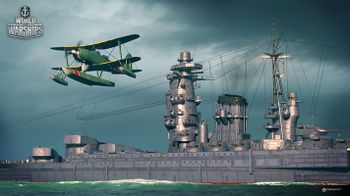 Other aircrafts in the game are fighters and spotters which belongs to many ships as Consumables (excepting destroyers). The amount of their sorties is limited. It can be increased by one flight using the "Superintendent" commander skill (does not work for aircraft carrier squadrons). They have a limited flight duration, however unlike fighters, spotter acts much longer.

Fighters patrol either the area around the ship or the area in the call point, automatically attack the approaching aircrafts. Depending on their amount the same amount of enemy units will be shot down. For example: your ship can call 2 fighters for one use of consumables. This means that only 2 attacking enemy aircraft will be shot down. As soon as this happens, the equipment will go into reload.

Spotters temporarily increases the maximum effective range of main battery guns by 20% and allows you to look at the battlefield from a higher angle. The direction of its movement also cannot be set manually. All actions are performed automatically.

Retrieved from "http://wiki.wargaming.net/en/index.php?title=Ship:Aircraft/temp&oldid=301731"
Categories:
Your location:
To log in, select the region where your account is registered
CIS Europe North America Asia
Or use Microsoft Login to enter WoT XBOX ecosystem
Log in