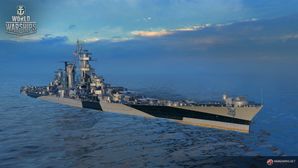 The recommended upgrades for Alaska are as follows:

) is generally recommended; however, for anti-aircraft duties, players should take Auxiliary Armaments Modification 1 (

Upgrade Slot 2 allows players to extend the duration of the Surveillance Radar consumable if they have the appropriate special module available in the Arsenal.

) is a good choice. However, many players utilize Propulsion Modification 1 (

) to increase the maneuverability of the ship. Choosing between these upgrades will be determined by the intended playstyle. 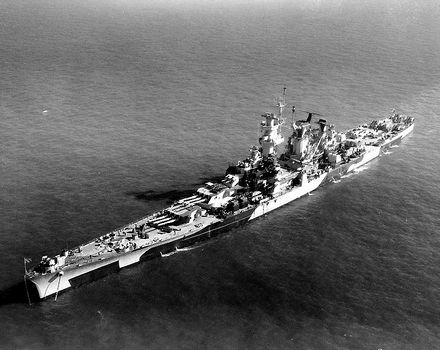 USS Alaska (CB-1) was the lead ship of the Alaska class of large cruisers which served with the United States Navy during the end of World War II. She was the first of two ships of her class to be completed, followed only by Guam; four other ships were ordered but were not completed before the end of the war. Alaska was the third vessel of the US Navy to be named after what was then the territory of Alaska. She was laid down on 17 December 1941, ten days after the outbreak of war, was launched in August 1943 by the New York Shipbuilding Corporation, in Camden, New Jersey, and was commissioned in June 1944. She was armed with a main battery of nine 12 in (300 mm) guns in three triple turrets and had a top speed of 33 kn (61 km/h; 38 mph).

Due to being commissioned late in the war, Alaska saw relatively limited service. She participated in operations off Iwo Jima and Okinawa in February–July 1945, including providing anti-aircraft defense for various carrier task forces and conducting limited shore bombardment operations. She shot down several Japanese aircraft off Okinawa, including a possible Ohka piloted missile. In July–August 1945 she participated in sweeps for Japanese shipping in the East China and Yellow Seas. After the end of the war, she assisted in the occupation of Korea and transported a contingent of US Army troops back to the United States. She was decommissioned in February 1947 and placed in reserve, where she remained until she was stricken in 1960 and sold for scrapping the following year.

Ships of U.S.A.
Cruisers
Retrieved from "http://wiki.wargaming.net/en/index.php?title=Ship:Alaska&oldid=281474"
Categories:
Your location:
To log in, select the region where your account is registered
CIS Europe North America Asia Republic of Korea
Or use Microsoft Login to enter WoT XBOX ecosystem
Log in