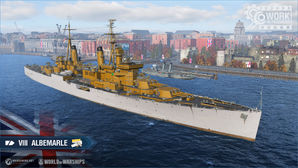 At first sight, Albemarle is only a marginal upgrade over her predecessor, Surrey. She equips 1 more gun for a total of nine 203mm guns in 3 turrets with a standard AB-X configuration. However, Albemarle is the first British heavy cruiser to receive access to an improved Repair Party that restores up to 40% of her total HP over 20 seconds (compared to the 14% over 28 seconds of her predecessor). Albemarle's enhanced Repair Party grants her increased survivability that is bolstered by her already high HP pool of 43,800, which is reflective of her heavy cruiser classification. On the flip slide, Albemarle also shares the mediocre handling of most heavy cruisers. Nevertheless, Albemarle's ability to out-tank cruisers she cannot out-damage—and even those she can—is a valuable trait.

Albemarle's HE is hard-hitting with among the highest maximum damage per shell of all Tier VIII cruisers (behind only the 234mm-armed Cheshire), though her AP performance is more lackluster. While her AP shells are capable of achieving citadel hits on broadside cruisers even 12 km away, astute enemy ships will quickly turn to eliminate further citadel opportunities and captains will usually default to her HE shells for their more consistent performance and relatively high fire-setting chance. With respect to her turrets, Albemarle's gun firing arcs are appreciably better for the aft turret. Because Albemarle's forward guns cannot turn very far toward the stern, firing more than 3 guns while retreating is dangerous. Captains may prefer to stay 12-15 km from enemy cruisers and battleships for easy opportunities to retreat, repair, return, and retaliate. Though Albemarle can hunt destroyers too, her 13 second main battery reload time handicaps her in this role.

Torpedo-wise, Albemarle is a welcome improvement over her predecessor. She mounts the same number of tubes—4 per side for a total of 8—with the same reload time of 96 seconds. Her torpedoes deal negligibly less damage for a 10 km range, 2 km greater than Surrey's, and a 62 knot speed. The 10 km range is just long enough to be periodically usable while the 62 knot speed does not cripple the practical damage-dealing capabilities of her torpedoes. With a full concealment build and camouflage, Albemarle even has a 0.2 km window to torpedo enemies while undetected. On top of that, Albemarle's torpedo arcs are wider than Surrey's and comfortable to use, increasing the practical utility of her torpedoes. The ability to launch torpedoes single-file, a characteristic shared with all other British ships but Campbeltown, further opens up additional opportunities to hurt even bow-tanking targets.

Overall, Albemarle is what captains can expect from a heavy cruiser with torpedoes. The increased efficiency of her British Repair Party is an added benefit that serves as a ship-saving fallback when engagements don't work out as planned. Albemarle is a reliable damage dealer on a platform designed to last and captains will fare well provided they keep her afloat long enough to take advantage of her heal.

Ships of U.K.
Cruisers
Retrieved from "http://wiki.wargaming.net/en/index.php?title=Ship:Albemarle&oldid=319641"
Categories:
Your location:
To log in, select the region where your account is registered
CIS Europe North America Asia
Or use Microsoft Login to enter WoT XBOX ecosystem
Log in