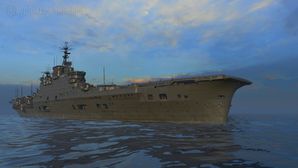 This heavy aircraft carrier project, designed at the end of World War II, represented a further development of the Implacable class. Her large dimensions allowed her to overcome the major drawback of her predecessors—the relatively small number of airplanes she could carry onboard. The aircraft carriers initially laid down as the Audacious class were completed much later, in the 1950s, with a significantly modified design.

She was laid down on 24 October 1942 at Harland and Wolff shipyard in Belfast as one of four ships of the Audacious class. These were laid down during World War II as part of the British naval buildup during that conflict. Two were cancelled at the end of hostilities, and the remaining two were suspended. Originally designated Audacious, she was renamed as Eagle (the fifteenth Royal Navy ship to receive this name), taking the name of the cancelled third ship of the class on 21 January 1946. She was finally launched by Princess Elizabeth on 19 March 1946.

Although Eagle was commissioned in October 1951 without an angled flight deck, one was added three years later. In 1952 she took part in the first large NATO naval exercise, Exercise Mainbrace.

Ships of U.K.
Aircraft Carriers
Retrieved from "http://wiki.wargaming.net/en/index.php?title=Ship:Audacious&oldid=282803"
Categories:
Your location:
To log in, select the region where your account is registered
CIS Europe North America Asia Republic of Korea
Or use Microsoft Login to enter WoT XBOX ecosystem
Log in