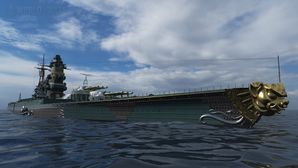 The survivability of Bajie is identical to that of her sister. A reasonably thick armor belt, a turtleback for additional protection and the 57mm main deck are strengths of her when encountering shellfire. At the same time however, large 32mm sections around her bow and her general size leave her vulnerable to sustained HE fire, making light cruisers particularly dangerous.

As a premium ship, Bajie comes included with Type XX camouflage that lowers her detection radius, reduces the accuracy of incoming shells, reduces her repair costs, and increases the amount of experience she earns.

Ships of Pan-Asia
Battleships
Retrieved from "http://wiki.wargaming.net/en/index.php?title=Ship:Bajie&oldid=294495"
Categories:
Your location:
To log in, select the region where your account is registered
CIS Europe North America Asia Republic of Korea
Or use Microsoft Login to enter WoT XBOX ecosystem
Log in