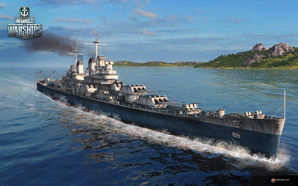 Designed after the treaty limitations had been lifted and built using the experience gained in World War II. Greater dimensions of the cruiser improved her survivability owing to a reinforced armor deck and enhanced protection for the propulsion. In addition to the main battery guns, the ship received dual-purpose artillery mounts.

Following on the heels of New Orleans at Tier VII, Tier VIII's Baltimore represents the new era of cruisers from the United States Navy. Not only was the firepower and protection improved, but in-game she also gets access to the Surveillance Radar (

) which makes her a strong team player. Baltimore cannot, however, single handedly deal with destroyers lit up by her radar due to a 10 second reload. Team play and focusing targets is a must. The armor-piercing shells get a very special taste, as she is the first cruiser in the branch to have the famous super-heavy AP shells that feature improved performance when hitting angled targets. As a trade-off these shells are slower however, and require more lead than the HE shells.

Her play style focuses around the objectives and island cover. Captains should stay close behind an island and be a threat to anyone approaching their position thanks to Surveillance Radar (

), and Baltimore’s shell arcs. It is important that a central position is chose in order to maximize her impact on the match; captains should avoid open-water combat under all costs, as her low shell velocity will make it easy for opponents to evade incoming fire while Baltimore is unlikely to do the same. Played effectively, Baltimore can be an excellent cruiser and destroyer killer.

Availability of researchable upgrades for Baltimore is as follows:

Captains should invest in the Gun Fire Control System first, as it will increase Baltimore’s main battery range to 15.8 km, which is desperately needed. The upgraded Hull can be saved for last.

The recommended upgrades for Baltimore are as follows:

Anti-Aircraft Build: A popular build for this ship, captains focusing on improving Baltimore’s AA will opt for Auxiliary Armaments Modification 1 (

) in Slot 3 to add more range for her AA up to 6.0km (7.2km with Advanced Firing Training skill). Although her AA is a powerful deterrent, its usefulness depends on whether there is a carrier in the game. To ensure these upgrades aren't wasted, consider divisioning with a Tier VIII carrier.

) in Slot 1 and Aiming Systems Modification 1 (

) in Slot 3 to increase her accuracy. This is especially useful when firing at destroyers detected during the short period that Surveillance Radar (

) is active. Baltimore’s base AA is still quite powerful without any AA-specific upgrades.

Baltimore can equip the following consumables:

) for Slot 2, especially when in a division with a carrier. For play outside of divisions, Hydroacoustic Search II (

) is recommended as the odds of seeing an aircraft carrier are slim.

) on Slot 3 to increase their in-game impact (hunting the extremely stealthy destroyers of Tiers VIII-X), as Catapult Fighter (

) is not always useful in detecting stealthy or smoke-covered enemy ships.

Type 1, 2, or 5 camouflage can be equipped for Credits

; Types 1 or 5 are recommended at a minimum to reduce detection range.

Players who wish to spend doubloons can equip Baltimore with Type 18 camouflage that lowers her detection range, reduces the accuracy of incoming shells, reduces her repair costs, and increases the amount of experience she earns.

The USS Baltimore was the lead ship of the Baltimore-class cruisers, which were the only USN cruisers to be built unrestricted by the pre-war Naval Treaties to see service in the US Navy. They were originally designed to be based on the Cleveland class and USS Wichita, the latter of which was based on the Brooklyn class. Because construction started in September 1939, treaty limits no longer applied and the new cruiser class could be built significantly larger and better than it was designed to be. As such, they were mounted with a superior array of anti-aircraft power, far better than that of any earlier class. There is also the Oregon City sub-class, which consisted of CA-122 to 124, that has only three distinct differences from the main class: a single crane placed on the center line replaced the two from the original, a single funnel replacing the two original funnels, and a shortened superstructure. Four more Oregon City-class cruisers were ordered on 14 June 1943, but were changed into the Des Moines-class cruisers before work began.

The USS Baltimore was commissioned in April 1943 and first saw service with Task Force 52 at the invasion of Makin in the Gilbert Islands, providing artillery support and anti-air screening for the escort carriers. The cruiser would also take part in the invasion of Marshall Islands, raid on Palau Islands, and invasion of Iwo Jima. The main task for the Baltimore was to support and provide anti-air cover for the carriers it was grouped with, such as the Saratoga, Lexington, and Princeton. In July 1944, it became the Presidential flagship and transported Franklin D. Roosevelt to Pearl Harbor, where he met with Admiral Nimitz & General MacArthur. It was only a short while before it would transfer the Presidential party to the USS Cummings and be relieved of its duty as Presidential flagship. The Baltimore returned to its duties as a carrier escort in December 1944.

Between 17 May and 11 June 1945, while operating off the island of Okinawa, a typhoon caused damage to the bow of the ship. This marked the end of Baltimore’s wartime service, as the Japanese surrendered while it was under repairs in Pearl Harbor. In the aftermath of the war, the cruiser carried out three 'Magic Carpet' missions, ferrying soldiers between Pearl Harbor & the US west coast. The cruiser was decommissioned in 29 April 1947, before being recommissioned for the Korean War in November 1951. However, the cruiser would never take a direct part in the war. Instead, Baltimore’s only major task was to visit Britain as a representative of the US Navy for Queen Elizabeth II's Coronation Review. Other than a few tours with the 6th & 7th fleets, the cruiser would be finally placed in reserve on 1 January 1956 and decommissioned 31 May 1956. She was struck off the Navy List on 15 February 1971.

Ships of U.S.A.
Cruisers
Retrieved from "http://wiki.wargaming.net/en/index.php?title=Ship:Baltimore&oldid=278344"
Categories:
Your location:
To log in, select the region where your account is registered
CIS Europe North America Asia Republic of Korea
Or use Microsoft Login to enter WoT XBOX ecosystem
Log in