) consumable. Black is unique among American destroyers in that she can equip Surveillance Radar, though her radar is weaker than those available to most other Tier IX ships, featuring only 7.5 km range and 22 seconds of uptime. Despite the reduction in range and short duration, this radar — combined with five fast-firing American destroyer guns — still makes Black a fearsome ship when contesting control points, able to see through smoke to spot for her team and continue damaging enemy destroyers.

Though she has three options for Slot 3', Blacks strongest asset is the Surveillance Radar (

) consumable, which can be equipped without giving up the Smoke Generator ( 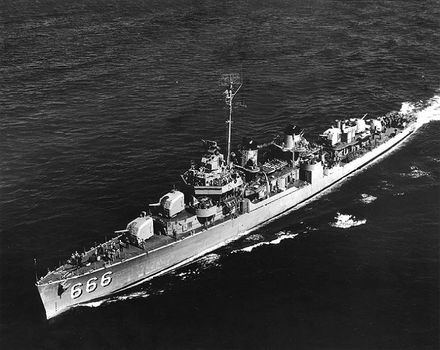 Retrieved from "http://wiki.wargaming.net/en/index.php?title=Ship:Black&oldid=303615"
Categories:
Your location:
To log in, select the region where your account is registered
CIS Europe North America Asia Republic of Korea
Or use Microsoft Login to enter WoT XBOX ecosystem
Log in