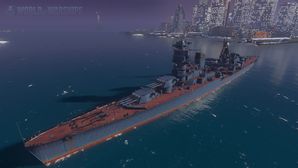 While slightly slower than its predecessor Shchors and carrying the exact same set of guns with only a touch longer range, the Chapayev sees improvements in most other respects. Her armor is upgraded from "virtually nonexistent" to "weak", she sees a significant boost in hit points, and her AA suite roughly doubles in effectiveness to a competent but not spectacular level.

The most intriguing addition is the long-range (12 km) Russian radar, available upon acquiring B hull. Judicious use can make for major plays on capture points by allowing the team to dislodge or destroy erstwhile hidden enemy destroyers. This combines well with the extra stealthiness enabled by the new upgrade slot.

B hull should be researched first for the radar. After that, only the fire control system remains.

Given her turning radius and range, some captains may prefer to equip Steering Gears Modification 2 (

) into Slot 5 and play Chapayev exclusively at long range. The increased rudder responsiveness will make her a more difficult target to captains who stay alert to incoming fire.

Players who wish to spend doubloons can equip Chapayev with Type 18 camouflage that lowers her detection radius, reduces the accuracy of incoming shells, reduces her repair costs, and increases the amount of experience she earns.

Chapayev also has an alternate premium camouflage called "Svyatozar", in which she appears as she does during the Halloween scenario "Sunray in the Darkness".

Ships of U.S.S.R.
Cruisers
Retrieved from "http://wiki.wargaming.net/en/index.php?title=Ship:Chapayev&oldid=292919"
Categories:
Your location:
To log in, select the region where your account is registered
CIS Europe North America Asia Republic of Korea
Or use Microsoft Login to enter WoT XBOX ecosystem
Log in