On 20 Jan. 2021 with Update 0.10.0 this article will become obsolete — almost everything in it will change.
A replacement article is under construction. For a list of the new skills see List of Commander Skills.

Upon reaching Account Level 7, a player is granted the ability to assign a Commander to each ship. Commanders can learn a variety of useful skills that enhance the performance of the ship. Sometimes these are straight buffs to the vital statistics of a ship — such as faster turret traverse speed or more hit points — while others confer entirely new abilities or tools for the player to use in combat. A highly skilled commander is among the most powerful upgrades a ship can obtain in World of Warships, working together with installed upgrades, chosen consumables, and equipped signals to enhance the performance and capabilities of the ship. 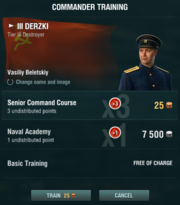 Once Account Level 7 is unlocked, a ship may not be queued for battle without a commander assigned to it. Thereafter, a commander can be recruited for a ship without one.[1] There are several options offered when recruiting a new commander:

When a ship is purchased from the tech tree, it can be with a newly recruited commander or without one. The latter option is useful when you intend to assign a commander from Reserve or another ship.

A Commander can be Dismissed at any time. This will free up a reserve slot. A dismissed commander can be recalled within 60 minutes. After that the dismissal is permanent.

Clicking on the Commander portrait in the top right of the Port screen brings up the Commander interface. This screen allows players to manage their Commanders in various ways.

The center of the Commander Interface displays the Commander skill tree — discussed in detail below — with currently trained skills highlighted. At the far left is the Redistribute function, that allows players to "respec" their Commanders by clearing their skill selections, thus allowing skill points to be assigned again.

Commanders who have available skill points to spend will show unspent points in the Port screen.

Commanders earn commander experience (CXP) in the same way that ships do, including any bonuses to ship XP

earnings. Additional bonuses that affect only commander XP — such as from Restless Fire

camo or the Zulu Hotel

signal — are added on top of this number. Therefore, it is possible to earn considerably more commander XP in a match than ship XP. See the Economics article for details of how CXP is calculated. Players can view how much commander XP they earned in a given match on the 'Credits and XP' tab of the post-battle report.

The table at right shows the experience requirements for a Commander to buy skill points.

A player with a WG Premium account earns 2,233 base experience in a game. He has Zulu Hotel

signals mounted, and has hoisted the Military Month Contributor

flag over his ship (the MMC flag grants both ship XP and commander XP bonuses). He earns: 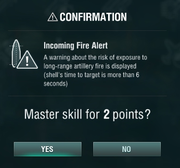 Each commander displays his skill points overlaid on his portrait as available/total. Thus a commander with 15 points, only 3 assigned, would show "12/15" on the lower left of his portrait. Clicking on the commander's portrait brings up the Commander Interface screen (see the graphic above), where a new skill may be selected. The interface will ask for confirmation.

Some skills are only useful to certain classes or to ships with certain weapon systems. Skills that are not useful to the current ship are marked as such. They may still be selected. (If a skill is not useful on the current ship, it may become so when the commander is moved to a different ship.) However, considering the amount of time it takes to train a highly skilled Commander, it is best to focus his skills on ones that are immediately useful. A complete list of skills, their point costs and effects, appears below.[2]

When training skills in Rows 2, 3 or 4, Commanders must have at least one skill trained from the previous row. Commanders are free to train any skill in a row before selecting any skill in the subsequent row; they are not confined to skills only within the sub-groupings shown below (and in the skill tree in the Commander interface).

Players will sometimes want to change the skill selections on one of their Commanders. This is accomplished in the Commander Interface by utilizing the "Redistribute" button (shown highlighted in orange on the graphic above). Redistributing Commander skill points costs either 25

, up to level 7 it is cheaper to recruit a new commander and accelerate their training than to redistribute skills of an existing commander. This will also result in two commanders instead of one.

On occasion — such as Christmas or other holidays — Wargaming offers sales on redistribution. Clan Battle participants have been enjoying one week of free redistribution at the beginning and at the end of Clan Battle seasons.

Reserve slots — (shown highlighted in green on the graphic above) — hold unassigned commanders. Commanders in the Reserve can be assigned to any ship (of the same nation) as normal, subject to re-training costs (see below).

Each player starts with four (4) Reserve slots. Additional Reserve slots can be purchased with doubloons -- normally four (4) slots for 100

. Slots are very rarely available through other means.

If a player receives a ship with a Commander, either from Premium shop, Armory, or a Container, the player receive an extra Reserve slot for that Commander.

Once trained to a non-premium ship from the tech tree, a Commander's skills can be fully utilized only on that ship. Transferring to a new tech tree ship requires the commander to re-training to that ship, which is usually accomplished by earning a certain amount of Commander XP in his new ship (see the table to the right). Normal commander training resumes once re-training has been accomplished.

When re-training is required, players are offered several options. Commanders can spend:

(and/or Free XP) equal to the remaining cost of re-training, finishing re-training instantly. This can be combined with the 200,000

option in order to save ECXP.

Remember that while a Commander is re-training, skill effects are reduced by 50% and skills with a binary (on or off) effect are disabled.

(ECXP) that accumulates in a common pool (like Free XP). (The current ECXP balance is shown highlighted in purple on the graphic above). 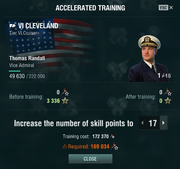 As Free XP is available to all ships, Elite Commander XP

is available to all commanders on a player account.

A commander with 7 Skill Points and 100 CXP is assigned to a non-premium ship for which he is not trained. 10,000 XP is required to fully re-train him. The player decides to accelerate re-training by 50%, spending 200,000 Credits

is available. The player completes re-training by spending 5000 ECXP. 3000 ECXP remains. (Note that CXP cannot be spent for re-training.)

Some commanders have unique talents or modified commander skills. Check out the list of unique commanders to learn more.

As a Commander gains levels, they are given ranks based on their nation. These roughly correspond to the historical ranks awarded to officers of their nation's respective navies. The table below lists these ranks as they appear in game.

Retrieved from "http://wiki.wargaming.net/en/index.php?title=Ship:Commander&oldid=301738"
Categories:
Your location:
To log in, select the region where your account is registered
CIS Europe North America Asia Republic of Korea
Or use Microsoft Login to enter WoT XBOX ecosystem
Log in