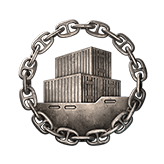 A Container is a box (think shipping container) with one or more rewards inside. Containers can be obtained in a number of different ways, depending on the type of container. This feature becomes available to captains starting at Account Level 5.[1]

Containers can be collected from a variety of sources, including:

Daily containers of known type are also called 'standard' containers. It is possible to obtain a few standard containers by means other than daily XP earnings.

Players are able to collect up to three Daily Containers per day by earning XP in battles. For the purposes of these containers, a 'day' is the 24-hour period (usually) beginning and ending at 3:00 AM local time. XP from battles is counted at the time the battle ends. During the 'day' modified XP accumulates and earns daily containers.

Note: Containers are earned by modified XP, not by base XP. Bonuses from a Premium Account, camouflage, signals, first-win bonus, and so forth count towards the total.

Newly earned daily containers are not yet typed. When each is earned the player may select the type of container by collecting it. To collect, click on the "Containers" button in the port screen. The Containers screen opens. Click the Collect Container button, then select the desired option.

Collected (or pre-typed) containers can be opened at any time: On the Containers screen click the Open Container button.

If a captain accumulates 1000 unopened containers, adding more will cause the oldest containers to be opened automatically.

At the beginning of the next day, uncollected containers are automatically collected and randomly typed (Try Your Luck cannot occur randomly). The XP accumulator is then reset.

When three or more typed containers accumulate, the option to open them all simultaneously is offered.

There are four[2] types of daily containers. When a container is collected manually, the player may choose the type:

Each daily container has a chance to become a Super Container when manually collected. The Try Your Luck (TYL) option is twice as likely to produce a Super Container. If one is not produced the award is one of the following:

Rarely, a Port Slot may be awarded in any of the above except More Resources containers. The Port Slot is awarded in place of, not in addition to, other contents.[3]

Elements of active collections may appear in standard containers. This is in addition to the above rewards. Note that only some collections are eligible for this, and only one collection at a time can be active.

There is a chance for a Patch symbol or background to appear in a standard container in addition to the above rewards. A duplicate grants 15,000

The more valuable the item (e.g. premium ship), the less likely it is to occur. The same rule applies for the amount: 1,000

Ships from a Container

Events may introduce special, limited-time types of containers. Many contain items for a specific Collection.

Included Gremyashchy and Imperator Nikolai I .

Battle of the North Cape

These were awarded for completing final tasks and Duke of York-specific tasks in the Battle of the North Cape campaign, as well as regular tasks in the New Year's Raid campaign of December 2017-January 2018.

These container were introduced in the The Hunt for Bismarck campaign.

Standard Bismarck - Originally awarded for completing standard tasks in the Bismarck campaign. In January 2018 they were awarded during weekend combat missions. Now available in the Armory in lots of 5 for 5,000 Coal

Big Bismarck - Originally awarded for HMS Hood-exclusive tasks in the Bismarck campaign. They were also available for sale in the Premium shop during the campaign, and (at least on some servers) again during January 2018.

Each container contains the following:

All Premium - sold in the Shop in bundles. Contains one of:

Premium - available in the Premium Shop that contain the following:

Armory version - Available in the Armory for 1000 Coal.

In support of the Go Navy! event.
Standard

Premium - available in the Premium Shop that contain the following:

In celebration of the World of Warships 3rd Anniversary:
Standard - Apparently just for hanging around.

and for completing segments of the Anniversary collection.

Armory version - Available in the Armory for 1000 Coal.

Up to five awarded for the Great Eight mission chain.

2nd? Anniversary of the Steam client.

Pumpkin-like containers are traditional elements of celebrating Halloween.
Standard - One item of the following:

Premium - One item of the following:

Black Friday containers are coming to the game! They can bring you one of the following items:

Standard - Available from Directives and Combat Missions. Combination of contents is uncertain.

. Combination of contents is uncertain.

In support of the "Fly! Strike! Win!" British aircraft carriers event.
Standard - Obtainable for Crowns (an event currency), in Daily Shipments, and Directives.

: Three items and maybe a mission:

In support of the WoWS/Azur Lane collaboration.
Standard - from combat mission, Three items:

In the Service of the Motherland

In support of the Victory event that introduced Russian battleships.
Standard - from combat mission, Three items:

Armory version - Now remaindered in the Armory for 1000 Coal

In support of the first half of the French Destroyers event.
Standard - Daily Shipments, daily combat missions, and Directives.

In support of the second half of the French Destroyers event.
Standard - From Daily Shipments, daily combat missions, and Directives.

In celebration of the World of Warships 4th Anniversary. They falleth like rain (actually, from Victory Bonuses - "Lootflakes"

- redeemed by a win in each Tier VIII-IX ship in port), and from Directives and in Shipments. One item:

For the completion of all four Directives during the World of Warships 4th Anniversary, a container with a randomly selected Tier VI premium ship was awarded.

This event did not offer containers per se, but randomly selected item bundles equivalent to containers in exchange for Filth, an event currency.

In support of the first half of the Italian cruisers event.
Standard - Earned from Italian tokens, Daily Shipments, and Directives. Three items:

: Three items and maybe a mission:

In support of the second half of the Italian cruisers event.
Standard - Earned from Mediterranean tokens, Daily Shipments, and Directives. Three items:

Standard - Earned from special missions and directives. One item:

A Santa's Gift container drops one of the following, in increasing likelihood:

A Santa's Big Gift container drops one of the following, in increasing likelihood:

A Santa's Mega Gift container drops one of the following, in increasing likelihood:

For the introduction of the European line of (mostly Swedish) DDs:

King of the Sea

Contains an element of the new King of the Sea collection. Obtained from Shipments and by watching the KotS tournament online.

In Celebration of April Fool's Day 2020. Contains an element of the new Bad Advice (Cap and Fish) collection. Obtained by subscription and from missions.

Can be bought using Recruitment Points earned from the recruiting station program.

Can be bought using 500 recruitment points. One of the following can be obtained:

Can be bought using 1,500 recruitment points. One of the following can be obtained:

Can be bought using 3,000 recruitment points. One of the following can be obtained:

Retrieved from "http://wiki.wargaming.net/en/index.php?title=Ship:Container&oldid=294973"
Category:
Your location:
To log in, select the region where your account is registered
CIS Europe North America Asia Republic of Korea
Or use Microsoft Login to enter WoT XBOX ecosystem
Log in