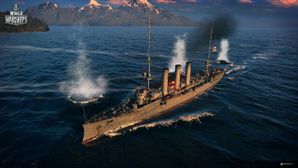 This ship, and her successor Kolberg, are well known for being an oddity in the German cruiser branch. While all German tech tree cruisers from Tier 7 and up are heavy cruisers, Dresden Kolberg barely qualify as light cruisers. In fact, they are more like gunboat destroyers. While she does have guns so small that higher-tier German ships use (a variant) of them as flak guns, Dresden can spew out an endless machine-gun stream of shells. That said, she can't do any damage whatsoever. Her AP shells are light and slow, with bad firing arcs, meaning they are worthless. Her HE shells are very bad, as is characteristic of German HE shells. With their 1/4 penetration values, Dresden will need to target destroyers or the superstructure of other ships to deal direct damage, with very few exceptions. However, HE shells still start fires, even if they don't penetrate. Additionally, since she will be meeting low-tier players who have poor DCP discipline, (excluding the seal-clubbers) she can burn everything to a crisp - except destroyers, who die so fast they don't have time to catch fire. She has low survivability, and poor maneuverability, but her speed is usable. She has horrible firing range and arcs, but accuracy doesn't matter when the whole map is raining shells.

Overall, Dresden is an oddity - something you will only find at low tiers. She is a small, fragile, protected cruiser, with bad maneuverability and usable speed. However, with a stupid number of guns (comparable to the Tier 3 St. Louis or Bogatyr) and a machine-gun rate of fire (each gun capable of outputting 15 rounds per minute) she can melt destroyers and burn anything larger to a well-done steak. Play her to her strengths and she is still average or below-average, but a ton of fun to use, and a great hinderance to enemies, which will vastly help your team. And winning battles gets you out of her faster. Very few players will spend more than a few battles in Dresden, which makes it easy to only see a part of what she truly is - a fragile machine-gun firing mostly worthless bullets. Destroyers stand no chance against her, but most everything else is a serious threat, given her poor penetration values, poor survivability, maneuverability, and fire chances. Stay with allies, so you can be continuously firing without having to weather retaliation. 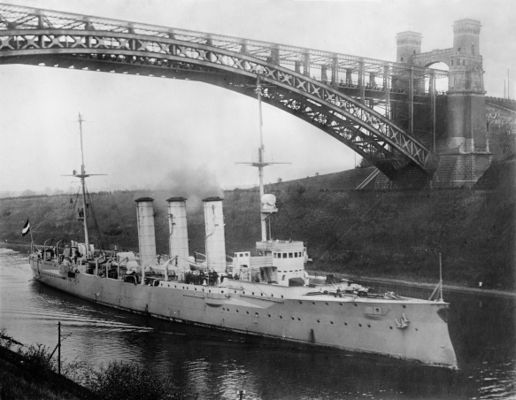 Retrieved from "http://wiki.wargaming.net/en/index.php?title=Ship:Dresden&oldid=302781"
Categories:
Your location:
To log in, select the region where your account is registered
CIS Europe North America Asia Republic of Korea
Or use Microsoft Login to enter WoT XBOX ecosystem
Log in