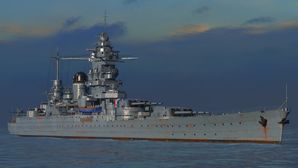 Dunkerque is unique from the other Tier VI battleships with her high top speed and entirely forward-facing armament. She plays extremely similar to North Carolina, Iowa, Nelson, or Izumo in that she is very durable when bow on, but has weak armor when broadside. Be careful to avoid close quarter brawl or static bow-on battle with other battleships early in the game as a well placed salvo can disable one or even both of her turrets.

Her guns have a high muzzle velocity with fast shell travel time, but dispersion can be annoying at times. She is good at killing destroyers and cruisers, but will struggle against a well-angled battleship in much the same way as Scharnhorst does. However, she can outrun equal tier battleships, so smart captains maximize her speed to decline unfavorable engagements, support their teams in killing enemy cruisers, and punish battleships who make positional mistakes.

) to reduce shell dispersion and boost the effectiveness of the secondary armament.

With all of her firepower in two turret modules, Level 1's Preventative Maintenance is highly recommended in order to increase the survivability of her main battery and reduce instances of potentially catastrophic turret destruction. Other key skills for Dunkerque commanders include High Alert, Basics of Survivability, and Advanced Firing Training. Fire Prevention is worth the points as well, given the size of her superstructure and how many cruisers captains at Tier VI fire nothing but high explosive rounds.

Dunkerque can equip the following consumables:

As with most battleships, captains are encouraged to invest credits (or doubloons) into Damage Control Party (

) in order to maximize their survivability.

As a premium ship, Dunkerque comes included with Type 10 camouflage that lowers her detection radius, reduces the accuracy of incoming shells, and increases the amount of experience she earns.

Dunkerque also has a alternate Premium camouflage called "Fleur d'acier" that was rewarded from the missions "The Colors Of Dunkerque" and/or "Flower of Steel".

Combat signals that increase her durability are must-haves for Dunkerque: India Delta (

) is not a bad idea, either. November Echo Setteseven (

) can help shore up her naturally weak anti-aircraft armament, especially when paired with the Basic Firing Training commander skill. Dunkerque spent most of 1939 operating in support of Atlantic convoys or attempting to intercept German raiders, ending in a joint sortie with HMS Hood at the time Scharnhorst and Gneisenau were also raiding in the North Atlantic. She sustained damage from heavy seas and returned to port for repairs. On 11 December 1939, Dunkerque sailed from Brest for Halifax, Nova Scotia, carrying gold to pay for weapons. On her return, she escorted a troop convoy to Britain. Returning to Brest in late December, she underwent refit, repairs, and trials until deployed in April to Mers-el-Kebir, Algeria with the Raiding Force as a counter to the increasingly belligerent Italy.

Ships of France
Battleships
Retrieved from "http://wiki.wargaming.net/en/index.php?title=Ship:Dunkerque&oldid=293187"
Categories:
Your location:
To log in, select the region where your account is registered
CIS Europe North America Asia Republic of Korea
Or use Microsoft Login to enter WoT XBOX ecosystem
Log in