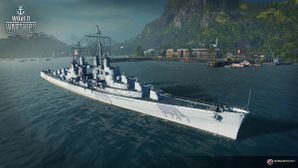 Flint belonged to a series of cruisers with very powerful dual-purpose guns. The major difference from the lead ship was her short-range AA armament, which was improved at the expense of fewer main guns.

Flint was originally available by reaching Rank 1 in three (3) separate seasons of Ranked Battles. She can now be obtained exclusively via the Armory for 168,000 Coal.

Flint is a Tier VII American cruiser that is a variant of the premium Tier VII American cruiser Atlanta, and was previously only available by reaching Rank One in three separate seasons of Ranked Battles, but now is available for 168,000 coal. She plays very-similarly to Atlanta; she can be used as a slightly under-gunned light cruiser, or she can be played as "heavy" destroyer.

Success in game depends on finding the sweet spot between the two. At 26,600 HP and a good chance that one of the heavyweights on the enemy team will hit critical areas if given a clean shot, it's best to weave through friendly traffic, get in close (the 5-inch main guns have a range of a touch over 11km) and spray whatever target is a priority with HE rounds. She'll do far more damage with fire than she will with actual shell impacts. AP rounds are highly situational with this ship as they will only penetrate broadside targets at point-blank range (less than 5km); however, they can be utterly devastating if her captain knows when to use them.

. She - and her sister ship, Atlanta - are unique in the game in that they have unlimited charges of the Defensive AA Fire

consumable. When coupled with her excellent anti-aircraft armament, she utterly shreds enemy planes. Flint’s torpedo armament is also improved over that of Atlanta; her torpedoes have a 9.2km range (versus Atlanta’s paltry 4.5km).

As a premium ship, Flint has no module upgrades to research.

Tactical Advice: Stick with HE most of the time, she'll do more damage for you in the long run that way. Don't go toe to toe with anyone unless forced into it. Even some destroyers outrange and outgun her. Keep her speed up at all times and move, move, move. Twist, turn, vary her speed; anything to throw the enemy's aim off. This ship is a knife fighter and you need to use it like a shotgun. Fast, messy, quick hit and run close quarters combat. If she finds herself at the front of the pack staring down a couple of ships, she's probably going to get hammered. Practice predicting the "arc" of the shells. This ship has a ridiculously high rate of fire but at anything beyond 4-5km the shells come in at such an extreme angle that she's literally "raining" or "walking" shells across her target. If she ends up going one-on-one with someone and they can concentrate on what her arc of fire is doing even a large slow ship has a decent chance to evade most of the impacts. Focus on ships already under attack by allies, add her firepower to the carnage.

Flint can equip the following consumables:

As a premium ship, Flint comes with Default permanent camouflage and a set of permanent combat bonuses.

USS Flint (CL-97) was a modified Atlanta-class light cruiser, sometimes referred to as an Oakland-class. She was named after the city of Flint, Michigan. She was launched on 25 January 1944 by Bethlehem Shipbuilding Corporation of San Francisco, California, sponsored by Mrs. R. A. Pitcher. She was and commissioned on 31 August 1944, with Captain C. R. Will in command. She was reclassified CLAA-97 on 18 March 1949.

Ships of U.S.A.
Cruisers
Retrieved from "http://wiki.wargaming.net/en/index.php?title=Ship:Flint&oldid=323796"
Categories:
Your location:
To log in, select the region where your account is registered
CIS Europe North America Asia
Or use Microsoft Login to enter WoT XBOX ecosystem
Log in