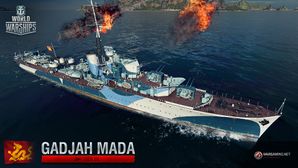 Laid down as an N-class destroyer of the Royal Navy (HMS Nonpareil), she was built in Britain and then commissioned into the Royal Netherlands Navy in 1942. Armed with powerful artillery guns and torpedo tubes, she had a very successful design for her time.

Tier VII's Gadjah Mada is a unique destroyer, named in honor of a legendary Indonesian military leader of the 14th century. The real Gadjah Mada started his military career as a royal bodyguard and fought his way up the ranks of the Majapahit Empire. Remembered for his fearlessness in combat and strong strategic mind, Mada made the history books with his unquenchable patriotism and determination to conquer a number of island kingdoms and unite the territory now known as Indonesia under the reign of his king.

Gadjah Mada’s model is new to the game, and as such, her style will require some practice. Her guns will remind veteran captains of those found on Błyskawica, and her deep water torpedoes can be absolutely devastating when deployed correctly. Gadjah Mada plays best in front of the fleet, scouting for torpedoes and other destroyers. If enemy battleships push a different flank, she has the flexibility and speed to change flanks via Engine Boost (

). As her torpedoes do not damage destroyers; subsequently, she is at a disadvantage in destroyer duels. Her AA weaponry is also weak, so battles containing aircraft carriers should prioritize avoiding their aircraft.

Availability of researchable upgrades for Gadjah Mada is as follows:

Hull (B) should be the first priority for module upgrades, as it adds hit points and maneuverability; the torpedoes should come next for the additional damage. Finally, research the Gun Fire Control System for additional range.

The recommended upgrades for Gadjah Mada are as follows:

Key skills for Gadjah Mada commanders include the standard core destroyer skills of Priority Target, Last Stand, Survivability Expert, and Concealment Expert. From there, the captain can branch off based on their style. A captain can choose skills to enhance guns (Advanced Firing Training and Basic Firing Training), torpedoes (Torpedo Armament Expert and Torpedo Acceleration), or perhaps fleet support (Smoke Screen Expert and Jack of All Trades). Gadjah Mada is a very flexible ship, and captains should experiment with different builds to find their favorite.

Players who wish to spend doubloons can equip Gadjah Mada with Type 17 camouflage that lowers her detection radius, reduces the accuracy of incoming shells, reduces her repair costs, and increases the amount of experience she earns.

Ships of Pan-Asia
Destroyers
Retrieved from "http://wiki.wargaming.net/en/index.php?title=Ship:Gadjah_Mada&oldid=294482"
Categories:
Your location:
To log in, select the region where your account is registered
CIS Europe North America Asia Republic of Korea
Or use Microsoft Login to enter WoT XBOX ecosystem
Log in