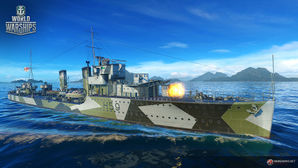 One of the U.K. G-class destroyers of the inter-war period. The ship participated in the Dunkirk evacuation when she rescued Allied troops from the beaches and harbor of Dunkirk. In total, she evacuated around 1,500 soldiers. On 29 May 1940, she was damaged during a raid from German dive bombers, but still made it back to England under her own power.

HMS Gallant marks the second entry of Royal Navy destroyers into World of Warships. Gallant is something of a mix of existing destroyer styles, packing torpedoes that will remind players of those found on Japanese destroyers married with main battery guns that are analogous to those of the American destroyer line.

Gallant’s torpedoes are identical to those deployed aboard Tier VI British cruiser Leander and pack a nasty punch for the tier, topping out at over 15,000 alpha damage. She carries them in a pair of quadruple-tube, centerline-mounted launchers — just like American counterpart Farragut — with a speed and range similar to the fish found deployed aboard Shinonome and Ernst Gaede. What makes Gallant unique is that she retains the ability of British cruisers to launch her torpedoes singly. This greatly increases her tactical flexibility, allowing her to spread her torpedo salvos around in a variety of different directions and angles and wreak havoc on enemy formations. The trade-off for this flexibility is the longest torpedo reload of all Tier VI destroyers and some of the worst torpedo firing angles of any destroyer in the game; the farthest forward that Gallant can rotate her torpedo launchers is nearly 60 degrees off the bow, for example.

Her guns will feel vaguely familiar to players accustomed to Farragut. While her firing range is significantly shorter than that of her US Navy counterpart, Gallant’s reload time, turret traverse time, and shell arcs are comparable. Gallant acquits herself well in close-range combat — especially if captains equip Main Battery Modification 2 — or as an extreme nuisance to enemy capital ships with the higher-than-average (for Tier VI, anyway) fire chance on her high explosive rounds. She's more than capable of defeating any of the Tier VI Japanese destroyers or Farragut in a straight up gunfight, but her low health pool will work against her when up against Ernst Gaede or Gnevny. Unless they're badly wounded, courting a gun duel with either of the latter is inadvisable.

) — Gallant is a well-rounded destroyer whose primary play style is likely to be focused around her torpedo armament, but who is capable of flexing her main battery guns in the mid- and late-game to finish off opposing destroyers that have survived to that point.

As a premium ship, Gallant has no modules to research.

The recommended upgrades for Gallant are as follows:

), a special upgrade that increases the duration of the Engine Boost (

) consumable by 50%. This upgrade is a viable alternative to Engine Room Protection because the additional speed provides Gallant with more ability to reposition and maneuver around enemy ships while maintaining enough distance to remain undetected.

), a special upgrade that increases the duration of the Smoke Generator (

) consumable by 30%. The increase is only 6 seconds but some captains might find it useful.

Unlike tech-tree Royal Navy destroyers, this is the standard RN smoke generator with a 20 second action time and a 160 second cooldown. Stock dispersion is 81 seconds.

As a premium ship, Gallant comes with Type 10 camouflage that lowers her detection radius, reduces the accuracy of incoming shells, and increases the amount of experience she earns. 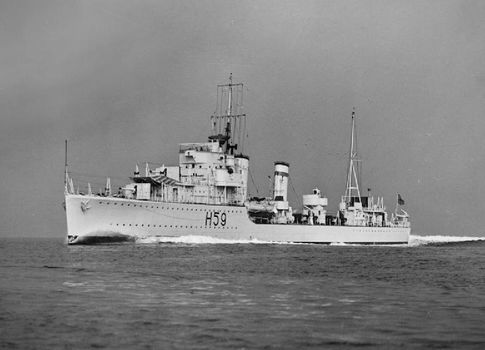 Gallant spent 26 May 1940 guarding the first convoys to reach Dunkirk, and on the night of the 27th she — alongside HMS Vega — scouted a smaller harbor in Dunkirk to see if it could be useful in the Allied evacuation (it was). She first embarked troops herself on the 28th, ferrying them back to Dover. On the 29th she embarked her second load of troops, when she came under attack by German dive bombers and a near-miss knocked out her steering. Nevertheless, Gallant made it back to Dover under her own steam before docking for repairs in the Hull shipyard, having lifted 1,466 soldiers back to Britain. She returned to duty on 5 June, a day after the final Dunkirk evacuations were completed. She resumed her escort and patrol duty, later joining battle cruisers HMS Renown and HMS Repulse in the ultimately unsuccessful search for the German battleships Scharnhorst and Gneisenau.

In late July 1940 Gallant was assigned to the Mediterranean Fleet, sailing for Gibraltar on 24 July to join Force H, responsible for screening aircraft carrier HMS Argus. She served in this role through the end of August, when she was moved to the screen of aircraft carrier HMS Illustrious and battleship HMS Valiant to reinforce the British Fleet in the Eastern Mediterranean. Gallant returned Gibraltar via Malta in mid-September and remained on station around Gibraltar, where, on 20 October, she and destroyers HMS Griffin and HMS Hotspur were credited for the sinking of Italian submarine Lafolé. On 31 October she joined the screen of battle cruiser HMS Renown and battleship HMS Barham to monitor Vichy French naval movements off Morocco. In November she was transferred back to the Eastern Mediterranean Fleet, joining Barham again to sail for the Eastern Mediterranean. On 24 November she screened battleship HMS Ramillies and accompanying ships being transferred out of the Mediterranean via Gibraltar. She was involved in the inconclusive Battle of Cape Spartivento on 27 November, finally arriving at Alexandria on the 29th. She spent the rest of the year on screening duties, most notably screening Illustrious and battleships HMS Warspite and Valiant in mid-December.

Ships of U.K.
Destroyers
Retrieved from "http://wiki.wargaming.net/en/index.php?title=Ship:Gallant&oldid=308738"
Categories:
Your location:
To log in, select the region where your account is registered
CIS Europe North America Asia Republic of Korea
Or use Microsoft Login to enter WoT XBOX ecosystem
Log in