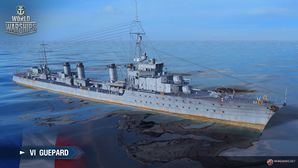 Armed with 139 mm artillery guns, the Guépard-class ships were, to a greater extent than their predecessor, in line with the concept of large destroyers — half cruiser, half destroyer.

It is at Tier VI that French destroyers fully different themselves by embodying a uniquely French characteristic. Starting with Guépard, French destroyers receive access to Main Battery Reload Booster (MBRB), a consumable currently found only on the French cruiser and destroyer tech tree lines from Tier VI to X and select French premium ships. Main Battery Reload Booster reduces the reload time of Guépard's main battery guns by 50% for 15 seconds with a cooldown time of 100 seconds. The short duration increase in DPM afforded by this consumable can be used as just that - a DPM boost - but is significantly more valuable when used at especially crucial times, such as when dueling enemy destroyers, shooting AP shells into the broadsides of enemy cruisers, or attempting to stack fires on enemy battleships that have recently used Damage Control Party.

Another strength of the French destroyer line that starts with Guépard is her upgraded 139mm main battery gun. (While the rest of the line also equips 139mm guns, earlier destroyers from Tier II to V use 100mm or 130mm guns.) Guépard's 139mm gun is the second largest caliber gun currently found on any destroyer[1] and is unique as the largest caliber gun that can be improved with the Basic Firing Training and Advanced Firing Training commander skills. Guépard's higher caliber guns have higher penetration, greater maximum damage, and faster reload speed as compared to her predecessor. However, though not terrible at Tier VI, the turret traverse speed decreases to 8°/s from the 10°/s of her predecessor. Other Tier VI destroyers have a turret traverse anywhere between 15°/s and 6°/s (higher is better). Combined with MBRB, Guépard is very competitive in duels and enemies should fear her. Starting with a loaded gun and assuming an (unrealistic) 100% HE hit and penetration rate, Guépard can deal 20,000 damage in the span of 14 seconds with MBRB active. Without MBRB, Guépard will deal 10,000 damage in that same time span.

However, Guépard's torpedoes are the same as her predecessors. She has the same number of them (two triple launchers) with the exact same parameters. As other destroyers have torpedoes that are improved from their predecessors', Guépard's torpedo range and damage are merely average. Nonetheless, Guépard can still stealth torp without Concealment Expert, though only barely with a 0.3 km window.

With Guépard, a clear focus on guns over torpedoes becomes evident. This emphasis continues with subsequent French destroyers. While Guépard does have two main weaknesses - her high detectability and lack of smoke - her impressive maximum speed of 45 knots and high health pool allows her to stay alive and redeploy to wherever she is needed even in the endgame. If captains can resist the initial allure of caps and avoid charging in at the start, Guépard performs her support role well.

Availability of researchable upgrades for Guépard is as follows:

It is recommended for captains to first research the Hull upgrade for an additional 3,000 HP on Guépard. Captains may decide to then proceed immediately to the next ship on the tech tree, Vauquelin. Alternatively, captains may research the PCA n° 6 Mle 2 upgrade for a 10% increase to Guépard's already large main battery range.

) is unnecessary and Main Armaments Modification 1 (

) is preferred to keep armaments functioning.

) is useful as incapacitation of the engine and/or steering gear can be fatal. With the Last Stand skill, Damage Control System Modification 1 (

) becomes viable as it can decrease the chance of fire and flooding.

) is useful for a slight decrease in dispersion. Alternatively, Torpedo Tubes Modification 1 (

) can be equipped to increase Guépard's torpedo speed by 3.4 knots to 71.4 knots.

) is another option for faster acceleration.

Players who wish to spend doubloons can equip Guépard with Type 16 camouflage that lowers her detection radius, reduces the accuracy of incoming shells, reduces her repair costs, and increases the amount of experience she earns.

Guépard was the lead ship of her class of destroyers (contre-torpilleur) built for the French Navy during the 1920s.

Three years after the Jaguar-class, the Marine Nationale came back to the contre-torpilleur-types with a revised design. Key in the design points was improving over the initial class, in particular an improved main battery using a 138.6mm gun. As a result, displacement increased substantially, to 2,690 tonnes (3,220 tonnes at full load), requiring machinery power to increase once more – this time to 64,000 shp – to maintain a design speed of 35.5 knots.

Despite the increased power of the machinery, the Guépard-class used only four boilers (reducing weight considerably), made possible by newer and improved types working at a pressure of 20 kg/cm2/215°C. Additionally, lessons from cruiser construction were applied, with the machinery adopting a ‘unit’ arrangement – previously, all turbines were aft of the boiler rooms, which made it possible for the ship to be immobilized by a single hit. A unit arrangement alternated placement – a boiler room, then turbine room, followed by a boiler room, and another turbine room. Thus, no one hit could completely disable the ship, and one shaft would always (in theory) be operational.

The main armament adopted a considerably more powerful gun – the 138.6mm/40 Mle 1923. The gun fired a 39.9 kg SAP shell at a velocity of 700 m/s, allowing for a maximum ballistic range at +35° elevation of 18,200 meters. However, like the 130/40, effective range was lesser, only 12-13 km (especially with the early 3-meter rangefinders, which could not spot fall of shot over 13 km). Rate of fire on the guns was a little higher – 5-6 rpm – although still less than designed, as the gun rammers were too weak and the shells too large to be effectively handled by gun crew. The amidships gun benefited with a much larger ready rack, of 48 shells. Fire control arrangements were largely the same, although unlike earlier ships the Mle 1923B fire control computer was installed when the ships were built, not after. Anti-aircraft armament was also altered - the 75mm guns were disposed of and replaced by four 37mm/50 Mle 1925 semi-automatic cannons, designed to be similar to the Vickers 40mm pom-pom used by the British and Italian navies (the latter produced by Terni under license). The guns were relatively ineffective, due to a horrendously slow rate of fire for the caliber (15-21 rpm, versus 50-75 rpm on the 40mm pom-pom). These were backed up by two twin 8mm machine gun mounts, eventually replaced by 13.2mm machine guns.

Torpedo armament was more capable than the prior types – although it still used two triple banks, it used an improved 550mm Mle 1924T launcher, which was capable of using the new 550mm Mle 1923DT torpedo. Warhead power was increased considerably, as was range – now 9,000 meters at 39 knots. Fire control methods remained the same as previous classes.

Overall, the ships were a considerable improvement over the Jaguar-class. Although they still had stability issues, they were far more stable than their troubled predecessors. They exceeded their design speeds in trials, and were much faster in service than their predecessors. However, like both the prior destroyer classes, turbine machinery was still not particularly reliable, and fuel consumption was much greater than predicted, reducing operational utility.

After France surrendered to Germany in June 1940 during World War II, Guépard served with the navy of Vichy France. She was among the ships of the French fleet scuttled at Toulon, France, on 27 November 1942. Her wreck later was salvaged and scrapped.

Ships of France
Destroyers
Retrieved from "http://wiki.wargaming.net/en/index.php?title=Ship:Guépard&oldid=302965"
Categories:
Your location:
To log in, select the region where your account is registered
CIS Europe North America Asia Republic of Korea
Or use Microsoft Login to enter WoT XBOX ecosystem
Log in