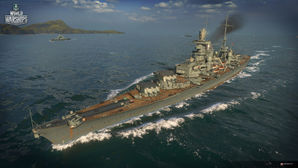 The ship was developed from a series of German heavy cruisers. Unlike ships of preceding classes, she boasted an increased displacement and more powerful main battery guns.

Settling in to play Hindenburg at Tier X will feel good to veterans of the branch who took the time to play the previous tier's Roon and get comfortable in her. Hindenburg is essentially a better Roon, with more guns, more torpedoes, more anti-aircraft defenses, and more health.

Sporting more main battery rifles than all other Tier X cruisers save the Japanese Zao and Italian Venezia, Hindenburg is gifted with a balanced 4x3 turret layout: turrets "Anton" and "Bruno" are forward of the superstructure, while "Caesar" and "Dora" are aft of it. This gives Hindenburg captains the flexibility to put all twelve barrels on a single target as necessary, or to present enemies with a significantly narrower profile to shoot and still keep half her main battery in action. Combined with her rate of fire, this makes Hindenburg a potentially deadly opponent to almost any ship she faces. While her individual high explosive shell performance looks uninspiring, it is deceptive; she fires a dozen, highly accurate shells every 9.8 seconds. They produce a prodigious number of fires and rack up solid penetration damage thanks to German HE shells penetrating enemy armor thicknesses 1/4 of their diameter and below (as opposed to most other cruisers' 1/6th diameter and below). Enemy ships who make the mistake of presenting a broadside profile to Hindenburg should be prepared to pay the price; her armor piercing shells have good penetration values and extremely high damage. Salvos of 10,000 damage or more against enemy battleships at mid-range or closer are not uncommon if they opt to disrespect the power of Hindenburg’s AP rounds.

Aside from her damage output, Hindenburg is a virtual Swiss Army knife of tools that allow her to contribute to her team's success in other ways. She is fairly mediocre (with a 30 mm midsection and 27 mm bow and aft), with an armor scheme that leaves her vulnerable at long range, but able to take more punishment than might be expected because of the turtleback as she closes with the enemy; her Repair Party

furthers her longevity. Her torpedo armament packs a serious wallop: Hindenburg loves to brawl with her enemies when given the chance, and her torpedoes frequently mean that she is the one sailing away afterwards, even from a point-blank engagement with an enemy battleship, although brawling shouldn't be your main focus in Hindenburg. Last — but not least — she has the best Hydroacoustic Search

in the game, capable of spotting incoming torpedoes more than four kilometers away, and detecting enemy ships at nearly six kilometers.

On the downside, Hindenburg has a staggering base detection radius of 15.5 kilometers; even when fully-rigged for stealth, the lowest detection radius she can achieve is 12.6 km. This is noteworthy in that there are some Tier X battleships capable of fitting out with an even lower detection radius. Further compounding her detectability issues is her armor scheme's vulnerability to long-range fire if not angled properly. Hindenburg is most vulnerable to large amounts of incoming damage when at long range. Even with these flaws, Hindenburg shines at long - mid range were she can maximise her guns with good ballistics and good pen.

Viewed as a complete package, Hindenburg is a very good long range HE spammer, but also does decently at close range. She is very capable of contributing to her team in any situation she might find herself in. She can provide her captain with the tools for winning, but it is up to the captain to employ these tools correctly.

As a Tier X ship, Hindenburg has no additional modules to research.

As the pinnacle of the German cruiser line, Hindenburg offers more flexibility to her captain than any other top-tier cruiser in the game. She can be fitted out as an anti-aircraft platform rivaling that of Des Moines; she can boost her main battery range and rain shells on opponents from positions that make her difficult to hit; she can boost the rate of fire of her main battery significantly and turn her into one of the best damage dealers in the game. All of these options — and more — are available to Hindenburg captains, depending on which upgrades and commander skills they choose.

The recommended upgrades for Hindenburg are as follows:

in this slot instead. Captains with access to Hydroacoustic Search Modification 1

are encouraged to plug those in Slot 2 depending on which consumable they opt to equip. Concealment System Modification 1 is the most popular pick for Slot 5 in order to help curtail her large detection radius. Conversely, Steering Gears Modification 2

is a strong option in the same slot for captains who prefer quicker rudder response, but this is not advised for a normal build.

The upgrade in Slot 3 is largely dependent on how captains intend to invest commander skill points on Hindenburg and the role they want her to fulfill in a given game.

, or you could choose Main Battery Modification 2

which improves her turret traverse greatly.

Hindenburg’s commander build is mostly similar to other cruiser counterparts, but with a few minor differences: Due to the extra Repair Party

consumable, Superintendent isn't as mandatory on her as you are unlikely to burn through five Repair Party

Alternatively, replacing Concealment Expert with Heavy HE And SAP Shells and Grease the Gears with Propulsion Modification 1

will give hindenburg more DPM, but this is advised for captains with excellent situational awareness as it gives up concealment for max DPM.

Hindenburg can equip the following consumables:

is one of her strengths. It allows her to hunt down destroyers in close proximity — particularly those shielded by smoke — and to warn friendly captains of incoming torpedoes in more than ample time to avoid them. Due to the rarity of carriers in high tier games, it is generally preferable to Defensive AA Fire

) should be flown to maximize health recovered via Repair Party

) is a good pick to increase her somewhat low top speed, while November Echo Setteseven (

) will help pile on more DPS for an Anti-Aircraft Build.

Like her predecessor, Hindenburg is a Wargaming-fabricated design made for World of Warships. Wargaming took Krupp's unused drawing of a triple 203mm/56 turret and built the ship around them while taking heavy inspiration from the Admiral Hipper-class cruisers. As a fictitious design, this class was never actually planned and no blueprints exist other than the turrets.

Hindenburg is actually the name of a Derfflinger-class battlecruiser that was in service with the Imperial German Navy from 1917 to 1919. No warship in the Kriegsmarine was ever named Hindenburg.

Ships of Germany
Cruisers
Retrieved from "http://wiki.wargaming.net/en/index.php?title=Ship:Hindenburg&oldid=320861"
Categories:
Your location:
To log in, select the region where your account is registered
CIS Europe North America Asia
Or use Microsoft Login to enter WoT XBOX ecosystem
Log in