The first vessel in the world to be completed as a purpose-built aircraft carrier. This ship was moderately sized and could carry a small air group. For her size, she was armed with an impressive artillery setup and had decent speed and manoeuvrability.

Being the first IJN carrier in the line, Hosho features a simple load-out that is easy for players new to carriers to use. She is a bomber-friendly guidance for players, as it's squadron load-out boasts two 4-man squadrons of torpedo bombers, allowing for players to test out a variety of ways in which they can bomb their target. Moreover, Hosho holds a maximum of one squadron-full of reserves for each squadron, which is much more forgiving than her USN counterpart. However, it's single fighter squadron may be problematic when the Hosho has to deal with its USN carrier counterpart, Langley. Also note that Hosho does not contain any dive-bombers, which means Captains will not gain any experience in their use until they unlock Zuiho; an experience Langley Captains will sure to exploit. They key to success in Hosho is leaning how to properly overwhelm your target with two torpedo squadrons, whilst using your fighter squadron to protect your strike aircraft from harassment. Preferred targets to strike will be slow, unaware, and isolated. In all, she is a good carrier that can teach newcomers to carrier play that favors bombing the enemy.

Aircraft should be the main priority for research. Research Yokosuka B4Y torpedo bombers first, as the cruise speed and HP per plane may prove to be harsh when attempting bombing runs on nimbler ships. Then research the Mitsubishi A5M4 fighters to allow for some chance of fighting back against enemy carriers. The Hull is upgraded last as it provides only extra ship health, which is not vital to carriers.

For Co-op setup, researching fighters might prove to be useful, as it allows you to preoccupy and out-DPS the enemy fighter squadron while your bombers remain unmolested. Finish up with researching Bombers and Hull upgrades, respectfully.

As a Tier IV carrier with only the first two upgrade slots (slots 1 and 4), the following upgrades are recommended on Hosho:

As Hosho is a Tier IV carrier with only one 4-man squadron of fighters and the only carrier no dive bombers, it's best to choose the following recommended skills. Players can opt to sacrifice Emergency Takeoff and Dogfighting Expert skills for Concealment Expert (which would reduce her detection to 7.1km when coupled with camouflage), but Hosho already has sufficient stealth and speed to avoid detection by enemy ships. Therefore, Concealment Expert is not a highly recommended skill. Priority Target and Incoming Fire Alert are not really necessary because when a carrier is detected, the ship often becomes a priority target for many players.

As a carrier at Tier IV, Hosho has access to only Damage Control Party.

Type 1, 2, or 5 camouflage can be equipped for credits; Types 1 or 5 are recommended at a minimum to reduce chances of being detected by the enemy.

As a carrier, Hosho can only mount at most four signals at a time and has no risk of detonating. Players should mount Equal Speed Charlie London (for faster XP grinding / increased XP gain per battle), Zulu Hotel (when coupled with Equal Speed Charlie London greatly helps increase commander (re)training), and Juliet Whiskey Unaone (to have a better chance at causing flooding and dealing damage via flooding). However, Juliet Whiskey Unaone is not highly recommended if the player wishes to conserve the signal for later tiers. 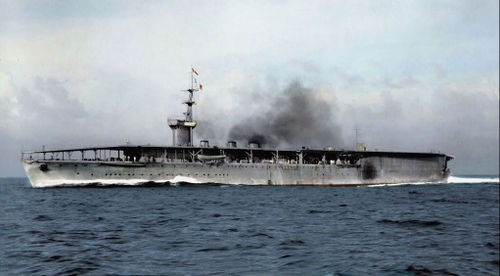 As Japan’s first purpose-built carrier, her design was based of a converted cruiser hull, which limited her tonnage to under 8,000 tonnes and no armour to speak of. For propulsion, eight boilers fed to two turbines, generating 30,000 shaft horsepower, which in speed trials pushed the vessel to 26 knots. For a ship of her size, she had an impressive range of above 8,000 nautical miles. Unique to Hosho, she carried an onboard gyrostabilizer to reduce rolling during rough seas.

As a purpose-built carrier, Hosho had a full, unobstructed flight deck that was slightly tilted down to aid aircraft acceleration. Originally built, Hosho had an island superstructure on the starboard side, which held the bridge and aircraft control centre. Hosho’s two hangars were designed to house different aircraft. The smaller, forward hanger housed fighters, while the rear, larger hangar housed bombers. Originally built, Hosho’s aircraft complement was 15 aircraft, split between fighters and torpedo bombers.

For close-in defence, Hosho was armed with four 140mm naval guns, which were considered to be a heavy battery for a ship of this tonnage, at that time. Carrier doctrine was non-existent at this time, and so designers considered artillery combat a possibility with aircraft carriers. Conversely, not much was considered for anti-aircraft defence; she was originally armed with two 80mm high-angle guns, positioned near the back of the ship.

From late 1935 to early 1936, Hosho was spending time in the dockyards after suffering damage from a typhoon while undergoing a training sortie with the Fourth Fleet. The entire first half of the flight deck had to be rebuilt and reinforced after the original one collapsed and had to be cutaway. Also while in the dockyards, measures were taken to decrease her top weight; funnels permanently swivelled horizontally, aircraft crane and upper deck aviation fuel tanks were deleted.

When the Second World War commenced, Hosho was pressed into service as secondary air-defence for the Main Body of Battleships for the Combined Fleet for not only the raid on Pearl Harbour, but Midway as well. With the Japanese defeat, Hosho returned to mainland Japan to resume training duties.

Retrieved from "http://wiki.wargaming.net/en/index.php?title=Ship:Hosho&oldid=252122"
Categories:
Your location:
To log in, select the region where your account is registered
CIS Europe North America Asia Republic of Korea
Or use Microsoft Login to enter WoT XBOX ecosystem
Log in