The first vessel in the world to be completed as a purpose-built aircraft carrier. This ship was moderately sized and could carry a small air group. For her size, she was armed with an impressive artillery setup and had decent speed and maneuverability.

As a carrier that loses too many aircraft will be unable to contribute to their team, players must learn to balance risk and reward when committing to an attack. Attack runs on targets that are either isolated or have weak AA defence is advised due to the relatively low risk involved. Players should also only call back their aircraft (f key by default) when they are safely outside AA bubbles in order to ensure they don't get shot down along the way.

The Hosho has only 1 upgrade, it's B hull, which provides it with better AA, manoeuvrability and a slight increase in health

The recommended upgrades for Hōshō are as follows:

Players should emphasize on incresing the HP of their planes as they have the lowest health of all 3 nations, a tren that continues up to tier 10

Type 1, 2, or 5 camouflage can be equipped for credits; Types 1 or 5 are recommended at a minimum to reduce chances of being detected by the enemy.

As a carrier, Hōshō can only mount at most four signals at a time and has no risk of detonating. Players should mount Equal Speed Charlie London (

). However, Juliet Whiskey Unaone is not highly recommended if the player wishes to conserve the signal for later tiers. 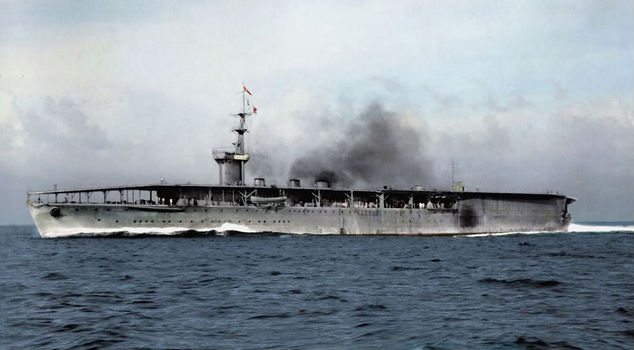 As Japan’s first purpose-built carrier, her design was based of a converted cruiser hull, which limited her tonnage to under 8,000 tonnes and no armour to speak of. For propulsion, eight boilers fed to two turbines, generating 30,000 shaft horsepower, which in speed trials pushed the vessel to 26 knots. For a ship of her size, she had an impressive range of above 8,000 nautical miles. Unique to Hosho, she carried an onboard gyrostabilizer to reduce rolling during rough seas.

As a purpose-built carrier, Hosho had a full, unobstructed flight deck that was slightly tilted down to aid aircraft acceleration. Originally built, Hosho had an island superstructure on the starboard side, which held the bridge and aircraft control center. Hosho’s two hangars were designed to house different aircraft. The smaller, forward hanger housed fighters, while the rear, larger hangar housed bombers. Originally built, Hosho’s aircraft complement was 15 aircraft, split between fighters and torpedo bombers.

For close-in defence, Hosho was armed with four 140mm naval guns, which were considered to be a heavy battery for a ship of this tonnage, at that time. Carrier doctrine was non-existent at this time, and so designers considered artillery combat a possibility with aircraft carriers. Conversely, not much was considered for anti-aircraft defense; she was originally armed with two 80mm high-angle guns, positioned near the back of the ship.

From late 1935 to early 1936, Hosho was spending time in the dockyards after suffering damage from a typhoon while undergoing a training sortie with the Fourth Fleet. The entire first half of the flight deck had to be rebuilt and reinforced after the original one collapsed and had to be cut away. Also while in the dockyards, measures were taken to decrease her top weight; funnels permanently swiveled horizontally, aircraft crane and upper deck aviation fuel tanks were deleted.

When the Second World War commenced, Hosho was pressed into service as secondary air-defence for the Main Body of Battleships for the Combined Fleet for not only the raid on Pearl Harbor, but Midway as well. With the Japanese defeat, Hosho returned to mainland Japan to resume training duties.

Retrieved from "http://wiki.wargaming.net/en/index.php?title=Ship:Hosho&oldid=283979"
Categories:
Your location:
To log in, select the region where your account is registered
CIS Europe North America Asia Republic of Korea
Or use Microsoft Login to enter WoT XBOX ecosystem
Log in