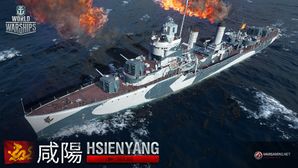 A Gleaves-class destroyer (USS Rodman, DD-456) built for the U.S. Navy. The ship was transferred to the Republic of China (Taiwan) in 1955. The ship's armament consisted of dual-purpose main battery guns and two quintuple torpedo tubes.

While the ships themselves may be similar, the way the two engage in combat is quite different. Hsienyang has 12.5km upgraded main battery range, more than the Benson, which allows her to fire upon opponents from farther away. However, the most notable tool the Hsienyang and other Pan-Asian destroyers have are their deep water torpedoes. While they cannot hit other destroyers, they are lethal against all other classes of ship and have higher flooding chance. These torpedoes are super stealthy and can only be surface spotted 0.7km away, giving enemy targets minimal time to evade. In comparison, Benson’s upgraded torpedoes are surface spotted from 1.1km away. These hard-to-dodge deep water torpedoes, combined with the rapid rate of fire of the main battery guns, makes Hsienyang very good in dealing damage over time on enemy targets.

) consumable. This allows Hsienyang to sneak up to unsuspecting enemy ships in a smoke cloud or cover and expose them to allied ships. However, her Surveillance Radar (

) is fairly short-ranged, so effective usage of the radar may require a captain to put Hsienyang at risk. In addition, the 15 second duration is a very short window of time to allow allies to shoot at targets detected by Surveillance Radar (

), thus it is somewhat impractical for spotting damage. Rather, the Surveillance Radar (

) is more useful as a tool for gaining information on the enemy ships' whereabouts and to scare enemy ships into abandoning their position and relocating.

For captains who opt out of Surveillance Radar (

), Hsienyang comes with the Pan-Asian version of Smoke Generator (

) that veterans of the line will be familiar with. In contrast to the smoke from American destroyers — that has both a long emission time and a long duration — the Pan-Asian Smoke Generator (

) is active for a long duration but the smoke itself dissipates fairly quickly. For Hsienyang, the Smoke Generator (

) is active for 30 seconds and dissipates in 70 seconds. These smoke characteristics allow Hsienyang to create long smoke lines to smoke up a strategic point, cover up allies, and/or provide cover to shoot out from.

Availability of researchable upgrades for Hsienyang is as follows:

Hull (B) should be the first place to spend experience. Truthfully, the torpedo and GFCS module upgrades can be considered optional; landing shells with Hsienyang’s guns at long range is challenging enough without additional range, and the improved torpedo module may not appeal to all captains.

The recommended upgrades for Hsienyang are as follows:

) for captains that want to maximize the Smoke Generator (

) active time to 39 seconds. Upgrade Slot 3 may also be filled in by Engine Boost Modification 1 (

) to boost the Engine Boost (

Key skills for Hsienyang commanders include Priority Target, Last Stand, Survivability Expert, and Concealment Expert for the first ten points. Adrenaline Rush is highly recommended as well, however Last Stand is more important. There are many different 3 point skills to choose from; Basic Firing Training and Demolition Expert are useful skills for players who want a gunboat build, while Torpedo Armament Expertise is a skill for those that choose a torpedo boat based build. Superintendent is also a highly recommended 3 point skill to take. Advanced Firing Training may be useful for players that prefer to shoot from longer distances, but in return that increases the range that Hsienyang will be spotted from while firing.

Hsienyang can equip the following consumables:

As is typical of destroyers, Smoke Generator II (

) is recommended to improve Hsienyang’s survivability.

Players who wish to spend doubloons can equip Hsienyang with Type 18 camouflage that lowers her detection radius, reduces the accuracy of incoming shells, reduces her repair costs, and increases the amount of experience she earns.

) is also recommended to increase the speed of the ship, while November Foxtrot (

) will decrease the reload time for consumables. Juliet Charlie (

) is a recommended option for captains concerned about an unfortunate early exit to port via detonation.

) is useful for speeding up the XP grind, while Zulu Hotel (

) will aid in accelerating the grind for commander XP.

USS Rodman (DD-456/DMS-21), a Gleaves-class destroyer, is the first ship of the United States Navy to be named for Admiral Hugh Rodman. Rodman was laid down on 16 December 1940 by the Federal Shipbuilding & Dry Dock Co., Kearny, New Jersey and launched on 26 September 1941; sponsored by Mrs. Albert K. Stebbins, Jr., grandniece of Admiral Rodman. The destroyer was commissioned on 27 January 1942, Commander William Giers Michelet in command.

Reclassified DD-456 on 15 January 1955, she decommissioned 28 July 1955 and was transferred the same day to the Republic of China to serve as RCS Hsienyang (DD-16). In this service she became infamous for being involved in collisions twice in 1956 and was subsequently nicknamed "Gōng Yáng" ("ram"). After she ran aground c. 1969, her new name and pennant number were reassigned to the former USS Macomb, which was acquired in 1970.
Rodman earned five battle stars during World War II.

Ships of Pan-Asia
Destroyers
Retrieved from "http://wiki.wargaming.net/en/index.php?title=Ship:Hsienyang&oldid=294483"
Categories:
Your location:
To log in, select the region where your account is registered
CIS Europe North America Asia Republic of Korea
Or use Microsoft Login to enter WoT XBOX ecosystem
Log in