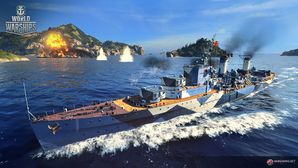 consumable: the other two being Perth and Mysore. Of these three, Huanghe distinguishes itself with excellent stealth, maneuverability, and anti-aircraft suite. However, the ship's advantages are balanced by her very low survivability and middling damage potential.

Playing Huanghe should be familiar to Perth veterans, as they both have the same creeping smoke screen thanks to the shared Crawling Smoke Generator

consumable. When moving at quarter speed (12.5 knots), the Huanghe can remain hidden in the continuously billowing smoke while moving towards or away from critical positions. In combination with her excellent 8.3km max. stealth, 530m turning circle, 950 m/s shell velocity, 4.2km smoke fire penalty, and her Hydroacoustic Search

, the Huanghe is one of the best cap supporting/contesting cruisers at her tier.

Huanghe benefits from access to the Special Upgrades that are available through the Arsenal. Captains should prioritize Smoke Generator Modification 1

, as it offers a significant upgrade to the Crawling Smoke Generator

is also useful, as it will better align your Hydroacoustic search duration with your upgraded smoke duration.

is the same as Perth's in terms of performance. Torpedo Reload Booster

is not recommended due to the lack of torpedoes the ship has, thus leaving Hydroacoustic Search

as the only preferable option for Slot 2.

As a premium ship, Huanghe comes with Default permanent camouflage and a set of permanent combat bonuses.

) will be helpful in augmenting the already powerful AA-suite; Sierra Bravo may also be useful to boost Hydroacoustic Search

Ships of Pan-Asia
Cruisers
Retrieved from "http://wiki.wargaming.net/en/index.php?title=Ship:Huanghe&oldid=324411"
Categories:
Your location:
To log in, select the region where your account is registered
CIS Europe North America Asia
Or use Microsoft Login to enter WoT XBOX ecosystem
Log in