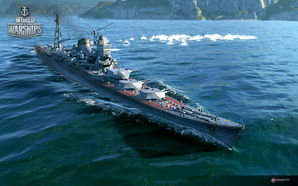 Developed from the Mogami-class ships. Ibuki retained the powerful artillery and torpedo armament of her predecessors, but received advanced armor and a reinforced AA system.

Ibuki is basically a 'repeat' of the Mogami design that has effectively solved her predecessor's shortcomings if we look at it in the engineering aspect. As a cruiser, she's a more beefy Mogami in most cases.

What you have learned in Mogami, Ibuki capitalizes and her range allows you to gain the initiative in shooting first. Her armour is no slouch as she can take more punishment than her predecessor, although her colleague, the Baltimore, is more durable. It is also worth mentioning that the ABC-XY turret layout, despite having ten guns in five dual-mount turrets, cannot match the Dmitri Donskoi in turrets and barrel number but rather has the heaviest broadside of any Tier IX cruiser which can be used to great effect. Combined with her range and proper usage, due to her rather impressive concealment, she can be a force to be reckoned with in the right hands.

Captains should first research Ibuki’s second hull for the increase in health, maneuverability, and anti-aircraft armament it provides. Next, researching the Gun Fire Control System is recommended to increase the ship’s maximum firing range. Lastly, the Torpedo module can be researched for a slight increase in torpedo speed.

The recommended upgrades for Ibuki are as follows:

The key skills for Ibuki are similar to those often used for Atago. They include Expert Loader at Level 1, Expert Marksman at Level 2, Superintendent at Level 3, and Concealment Expert at Level 4. Captains who use the ship’s torpedoes often may find Torpedo Armament Expertise useful for reducing the reload time of the launchers. Last Stand is recommended to those who often find their engine or rudder incapacitated. Lastly, Basic Firing Training and Advanced Firing Training can be taken to improve upon the ship’s anti-aircraft armament.

Ibuki can equip the following consumables:

Premium versions of these consumables can be mounted to reduce their cooldown timers.

Players who wish to spend doubloons can equip Ibuki with Type 19 camouflage that lowers her detection radius, reduces the accuracy of incoming shells, reduces her repair costs, and increases the amount of experience she earns.

Ibuki captains should mount the standard flags to improve the ship's performance in battle. To improve upon the ship's armaments, India X-Ray (

) flags can also be used to increase the amount of hit points that can be recovered using the Repair Party consumable. Sierra Mike (

The Ibuki-class (伊吹型 Ibuki-gata) cruisers were the last class of heavy cruisers built for the Imperial Japanese Navy (IJN). In order to save design time, the ships were essentially repeats of the earlier Mogami class. Begun during World War II, only the lead ship, Ibuki, was launched, but was in the process of being converted into a light aircraft carrier when construction was suspended in 1945. She was scrapped beginning in 1946. The unnamed second ship was scrapped less than a month after being laid down in order to clear her slipway for an aircraft carrier.

Ships of Japan
Cruisers
Retrieved from "http://wiki.wargaming.net/en/index.php?title=Ship:Ibuki&oldid=292870"
Categories:
Your location:
To log in, select the region where your account is registered
CIS Europe North America Asia Republic of Korea
Or use Microsoft Login to enter WoT XBOX ecosystem
Log in