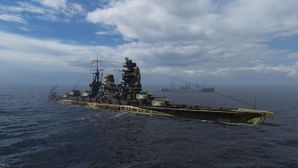 Originally designed for a Naval mission of the purpose now long forgotten, Ignis Purgatio was lost during the Horus Heresy. After missing for several millennia, the ship was rediscovered on one of the Frontier worlds in the Jericho Reach. Though clearly a warship, it was put to use as a transport by its new, uncouth masters who failed to recognize its true potential. After undergoing intensive repairs and cleansing its quarters of its previous inhabitants, Ignis Purgatio was eventually returned to Imperial Navy service and, since then, it has become an essential component of Battlefleet Solar. Once again, it acts as a fearsome guard dog for humanity and, by proxy, the Emperor Himself.

Ignis Purgatio was first released in June 2020 in collaboration with Games Workshop.

As a premium ship, Ignis Purgatio doesn't have any upgrades to research.

The recommended upgrades for Ignis Purgatio are as follows:

Retrieved from "http://wiki.wargaming.net/en/index.php?title=Ship:Ignis_Purgatio&oldid=304511"
Categories:
Your location:
To log in, select the region where your account is registered
CIS Europe North America Asia Republic of Korea
Or use Microsoft Login to enter WoT XBOX ecosystem
Log in