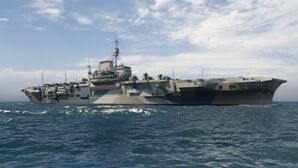 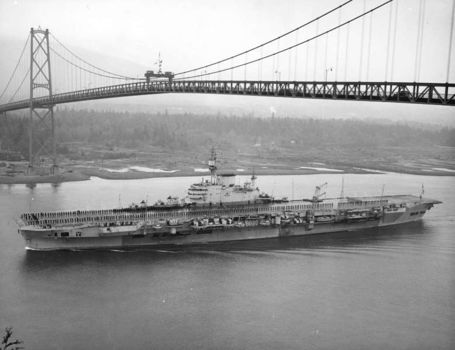 The 760-foot (231.6 m) armored flight deck had a maximum width of 102 feet (31.1 m). A single hydraulic aircraft catapult was fitted on the forward part of the flight deck. The Implacable-class carriers were equipped with two lifts on the centreline, the forward of which measured 45 by 33 feet (13.7 by 10.1 m) and served only the upper hangar, and the aft lift (45 by 22 feet (13.7 by 6.7 m)) which served both hangars. The upper hangar was 458 feet (139.6 m) long and the lower hangar was 208 feet (63.4 m) long; both had a maximum width of 62 feet (18.9 m). Both hangars had a height of only 14 feet which precluded storage of Lend-Lease Vought F4U Corsair fighters as well as many post-war aircraft and helicopters. Designed to stow 48 aircraft in their hangars, the use of a permanent deck park allowed the Implacable class to accommodate up to 81 aircraft. The additional crewmen, maintenance personnel and facilities needed to support these aircraft were housed in the lower hangar. The ships were provided with 94,650 imperial gallons (430,300 l; 113,670 US gal) of aviation gasoline.

Ships of U.K.
Aircraft Carriers
Retrieved from "http://wiki.wargaming.net/en/index.php?title=Ship:Implacable&oldid=293553"
Categories:
Your location:
To log in, select the region where your account is registered
CIS Europe North America Asia Republic of Korea
Or use Microsoft Login to enter WoT XBOX ecosystem
Log in