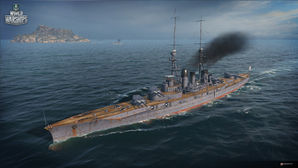 Her 305mm armor-piercing rounds will also give players some headaches. Don't expect them to reliably penetrate enemy battleships; hilariously, she is better off firing high explosive rounds at enemy battlewagons. With a 32% base fire chance out of her HE shells, she can reliably light enemy battleships on fire and keep them burning for extended periods of time. Thankfully, her AP rounds are perfectly serviceable against enemy cruisers, due to a low chance of overpenatrating the citadel.

The recommended upgrades for Ishizuchi are as follows:

The following information is provided for players who wish to create a permanent captain for the ship. Those players who are retraining captains or using the ship to gain extra experience for a captain should consult the page relevant to the ship to which the captain will be assigned. Be aware that Manual Fire Control for Secondary Armament does not provide the accuracy bonus it does to ships of tier 7 and up; it may be better to not have it.

As a premium ship, Ishizuchi comes included with Type 9 camouflage that lowers her detection radius, reduces the accuracy of incoming shells, and increases the amount of experience she earns.

Retrieved from "http://wiki.wargaming.net/en/index.php?title=Ship:Ishizuchi&oldid=304507"
Categories:
Your location:
To log in, select the region where your account is registered
CIS Europe North America Asia Republic of Korea
Or use Microsoft Login to enter WoT XBOX ecosystem
Log in