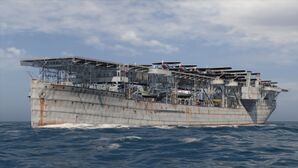 The Template:var:ship name has the unfortunate distinction of being the slowest aircraft carrier in the game. If discovered, it can't get away from anything - not even battleships. Keep an eye on your map and start moving long before enemies get near detection range. With only one squadron each of fighters, torpedo bombers, and dive bombers, Template:var:ship name commanders will have to make sure that every strike mission counts. The carrier itself starts with no AA armament whatsoever. It does have four 127 mm cannons which will sink a heavily damaged destroyer on occasion, but their range is pitiful. It is highly recommended to stay back and hide, or try and stay with the team.

Due to Template:var:ship name being one of the slowest ships in the game at 15kts, it is unable to outrun any ship that may be chasing it - therefore Emergency Takeoff is a better skill than Basic Firing Training for shooting down incoming aircraft. Furthermore, due to Hosho having Tier V fighters, Dogfighting Expert is a very good skill to utilize against Hosho.

As a carrier at Tier IV, Template:var:ship name has access to only Damage Control Party.

As a carrier, Template:var:ship name can only mount at most four signals at a time and has no risk of detonating. Players should mount Equal Speed Charlie London (for faster XP grinding / increased XP gain per battle), Zulu Hotel (when coupled with Equal Speed Charlie London greatly helps increase commander (re)training), November Echo Setteseven (for better bomber self-defense against fighters and increased AA DPS), and Juliet Whiskey Unaone (to have a better chance at causing flooding and dealing damage via flooding). Players can also choose to equip the Dragon Flag for faster commander (re)training.

Ships of U.S.A.
Aircraft Carriers
Retrieved from "http://wiki.wargaming.net/en/index.php?title=Ship:Langley&oldid=269972"
Categories:
Your location:
To log in, select the region where your account is registered
CIS Europe North America Asia Republic of Korea
Or use Microsoft Login to enter WoT XBOX ecosystem
Log in