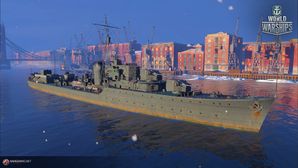 The L and M class destroyers were a class of destroyers built and launched between 1938 and 1942. The defining feature of this class was their new QF 4.7-inch Mk XI guns which fired a heavier shell than their predecessors and were placed on fully enclosed weatherproof mounts.

Lightning was laid down on November 15th, 1938 and launched April 22nd, 1940. She would serve in WW2 for the Royal Navy from 1941 until 1943 when she was sunk by German torpedo boats while attempting to intercept a German Convoy.

Lightning is the Tier VIII ship in the British Destroyer Line and is a direct upgrade in terms of play style and capabilities over the Jervis. Similar to her predecessors she thrives in a defensive role.

Lightning uses the 120 mm/50 QF Mk XI gun which has far improved characteristics over the guns that are used on Jervis. The most apparent differences will be the 360 degree traverse on all of her gun mounts and the flatter shell trajectory making them some of the easiest destroyer guns at Tier VIII to use. Her HE shells have an average alpha damage per shell at 1700 but an above average base fire chance at 9 percent. Her AP shells have an alpha damage of 2200 per shell however they are heavier and fly faster than the many of her contemporaries shells giving them an above average shell penetration. The damage per minute for her AP and HE shells are average due to the 4.5 base reload on her guns. Lightning has some of the most effective destroyer guns at the tier when used defensively and in knife fights. The 360 degree turret traverse and good firing arcs allow her to maneuver heavily while keeping all of her gun mounts on target much easier than other ships in the tier. The average damage per minute on the AP and HE shells can be mitigated by her captain using the above average fire chance and AP penetration to increase the effective damage.

The torpedo armament of Lightning is centered entirely around defensive use. Her 2 quadruple torpedo launchers have a base reload of 96 seconds, an alpha damage of 15886, and a speed of 61 knots which are average for the tier. Being a British Destroyer she has the ability to single launch her torpedoes allowing captains to very accurately launch torpedo salvos and launch partial salvos. The ability to single launch her torpedoes comes with the downside of having only 8km range. The short range forces her to come to much closer ranges in order to effectively launch her torpedoes and make them very hard to use if the enemy vessel is sailing away or has Surveillance Radar

The utility of Lightning is arguably her strongest trait. She has the standard British Smoke Generator

consumable that has the shortest emission time and duration in the game in exchange for having the highest number of charges and shortest recharge rate in the game. It discourages sitting and firing from smoke but allows her captain to be much more liberal when using it to disengage. She has the British Destroyer short range Hydroacoustic Search

consumable which trades ship detection range for much longer action time. Her concealment is superb with 7.02 km base concealment allowing her to achieve a 5.5 km concealment when combined with Concealment System Modification 1

and Concealment Expert. While she does not have access to an Engine Boost consumable and has a low top speed of 36 knots, she has improved acceleration by default and can get up to speed faster than any other nation's destroyers.

Lightning is the first British Destroyer in the tech tree to have access to long range AA however her AA defenses overall are below average for Tier VIII. Her continuous damage of 100 is on the lower side of her tier. Her damage from flak bursts is standard at 1260 however only fires 1 flak burst per salvo without modification. She does not have access to a Defensive AA Fire consumable making any investment in AA modules or captain skills yield little return in usefulness.

Similar to the rest of the line Lightning excels as a defensive destroyer especially when being used to contest cap points. She can be one of the most formidable destroyers to attempt to push given her incredibly low concealment, ability to aggressively knife fight, and single launch torpedoes.

Captains of Lightning should opt to play on a flank that the enemy is pushing or very likely to push which might mean waiting and seeing how the enemy team behaves before committing to an area. Lightning is best used as a buffer between an approaching enemy force using her excellent concealment and acceleration to engage enemy destroyers and using single launch torpedoes to dissuade an enemy push. Lightning will out spot most enemy destroyers that she faces allowing her to place herself in a better position to engage or disengage if the fight is unfavorable. She is more forgiving to mistakes than other destroyers due to her British Smoke Generator

and improved acceleration allowing her to disengage from unfavorable scenarios more easily and more often than others.

Lightning should be tailored toward improving her concealment first and her firepower second to enhance her ability to engage and disengage when desired. Her torpedoes have more limited uses and should hold less priority than her guns.

Ships of U.K.
Destroyers
Retrieved from "http://wiki.wargaming.net/en/index.php?title=Ship:Lightning&oldid=325497"
Categories:
Your location:
To log in, select the region where your account is registered
CIS Europe North America Asia
Or use Microsoft Login to enter WoT XBOX ecosystem
Log in