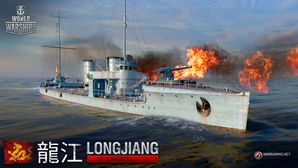 In 1913, this destroyer was ordered from Germany in order to reinforce the Republic of China Navy with up-to-date ships. She was never built, but her design formed the basis for German V-25 destroyers.

As their name might imply, the Type 1913-class Hochseetorpedoboote (ocean-going torpedo-boats) were designated for the 1913 and 1914 fiscal year naval construction programs of the Kaiserliche Marine. Contemporarily known as the V25-class (based on the lead ship), the main goal for their inception was to improve on the Type 1911-class torpedo boats – contemporarily known as the V1-class – which proved to be disapprovingly ineffective at their intended role

Many improvements were summarily implemented. In comparison to their predecessors, the V25-class was larger in every dimension to increase overall displacement, and ergo increase internal volume and functionality. As well, the vessels moved to using purely oil-firing boilers, instead of the more common coal or mix-firing boilers of the time. Despite the greater operating costs, the intended effects were achieved. The class of vessels were able to achieve better cruising capabilities and in general attain better seaworthiness. The transition to oil-firing machinery resulted in higher speeds. In fact, despite the design specifications rating the propulsion to achieve no more than 33 knots, almost every ship was able to exceed that parameter in sea trials; the fastest ships surpassed the benchmark by almost 3 knots. Furthermore, since the oil-firing equipment was smaller than conventional coal and mix-firing equipment, less manpower had to be dedicated to their daily operations, and the space saved could be allotted for more fuel. Hence, the V25-class achieved greater operation range than that of their predecessors as well.

The class was able to incorporate some of the latest torpedo boat-level weaponry that was in the Kaiserliche Marine arsenal. The class all mounted three of the latest 88mm SK L/45 rifled guns in single mounts; forward, centre, and aft, respectively. To increase their potency, most of the coats in the class later had their guns replaced with the much more powerful 105mm SK L/45 guns. Furthermore, the class carried six torpedo tubes with eight of the latest 50cm torpedoes. Interesting to note, the Kaiserliche Marine still kept experimenting with and implementing forward facing torpedo tubes, which later would become a staple of torpedo boat construction.

Interestingly, SMS V-25 herself briefly carried a Friedrichshafen FF.33 seaplane in place of her middle gun.

Over the span of three years, three shipyards would construct 71 Type 1913 Hochseetorpedoboote across Imperial Germany. As per the serializing procedure of the Kaiserliche Marine, the ships were numbered according to the yard that built them. For example, SMS V25 was the 25th torpedo boat built by AG Vulcan Stettin.

These 71 torpedo boats would go onto serving in the High Seas Fleet during World War I. 62 would be lost over the course of the War: 32 sunk during combat in the North and Baltic Seas, 30 would be scuttled with the German fleet in Scapa Flow. The remaining 6 were given off as war reparations to Britain, France, and Italy.

The V-25-class only served with the Imperial German Navy. The Republic of China considered ordering torpedo boats from Imperial Germany to bolster its Navy, but such a decision was not further pursued.

Ships of Pan-Asia
Destroyers
Retrieved from "http://wiki.wargaming.net/en/index.php?title=Ship:Longjiang&oldid=255125"
Categories:
Your location:
To log in, select the region where your account is registered
CIS Europe North America Asia Republic of Korea
Or use Microsoft Login to enter WoT XBOX ecosystem
Log in