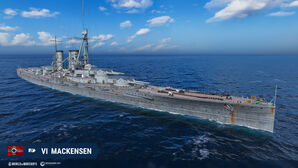 Battlecruisers that were being built during World War I. Their main advantage compared to their predecessors was enhanced firepower achieved through shifting to 350 mm main battery guns.

Mackensen was first released in Early Access with Update 0.10.9.

To combat the construction of HMS Hood and make up for the thirteen cruisers sunk during the war, the Mackensens were designed as a further development of the Derfflinger class. Originally requested by the Kaiser to be armed with 15in guns, the Commander in Chief of the navy preferred the 12in guns of the Derfflingers. A compromise was made for a 13.8in gun size. While based off of the Derfflingers, the Mackensen had several improvements in their design. The aft deck was raised to reduce the wetness at speed, and the rudders were mounted side by side to cut down on the turning radius. Construction on all four of the Mackensens were never completed, as supplies were diverted to build U-boats.

Tier VI Mackensen continues many of the distinctive traits of the preceding battlecruisers — high speed for her tier, good concealment for a battleship, and better main battery accuracy, but lower survivability. She also gains access to the Hydroacoustic Search

consumable and features improved horizontal dispersion on her secondaries, two other traits that will be shared with the rest of the line.

Mackensen shares many similarities with her premium cousin and real life sister ship VI Prinz Eitel Friedrich, including very similar hull designs, handling, and armament. However, while Prinz Eitel Friedrich in game leans more toward the battleship side of battlecruisers, Mackensen is slightly more on the cruiser side.

Her guns are still battleship caliber for the tier, but her speed and ideal positioning give her some cruiser-like aspects in-game and her armor protection lies somewhere in between. She is still forgiving of some mistakes against lower and same tier enemies, but higher tier enemies are more likely to punish those same mistakes.

In keeping with the characteristics of preceding ships, Mackensen is one of the fastest battleships at Tier VI. This high top speed allows her to quickly reach advantageous positions and react to changes in the battle over time. Experienced players should use that speed to her advantage, but newer players need to be careful of overextending.

Like the earlier battlecruisers, Mackensen is not an agile ship. With one of the largest turning circles and slowest rudder shifts among Tier VI battleships, she relies on positioning and concealment to avoid enemy fire and torpedoes. Her torpedo protection is average as well, further increasing the importance of positioning and her hydroacoustic search consumable to dissuade torpedo attacks.

Mackensen is armed with eight 350mm guns in four centerline twin turrets. She uses the same turrets and shells as found on VI Prinz Eitel Friedrich, although Mackensen’s rotate faster. She also has one of the fastest reloads of all Tier VI battleships, currently beaten only by French battleship VI Dunkerque.

As with the rest of the line, Mackensen uses the large cruiser dispersion found on ships like IX Alaska and VI Graf Spee. This gives her better dispersion than other battleships at her tier, but her lower sigma will result in some inconsistent salvos. Players of other lower sigma battleships like VII Lyon should be familiar with the effect this has on dispersion, where some salvos are accurate and others land nowhere near the aim point. However, the improved dispersion still results in fairly accurate shots where other low sigma ships may feel less consistent. As a result, players can comfortably select modules to boost her secondaries without having to sacrifice too much main battery performance.

Mackensen’s secondaries are surprisingly effective for a Tier VI battleship. Like the preceding battlecruisers V Derfflinger and IV Moltke, most of Mackensen’s secondaries are casemate-mounted 150mm guns, supplemented by eight (8) 88mm guns. As with most other German battleships, they feature improved range and the 150s also have improved penetration. Although Mackensen only gains two (2) 150mm guns and some range over the preceding ships, her secondaries have improved horizontal dispersion.

Like Derfflinger at Tier V, Mackensen has one of the highest stock health pools among Tier VI battleships, but the lack of an upgraded (B) hull leaves her slightly below average against other upgraded hulls. While not as fragile compared to her tier as later battlecruisers, Mackensen is less durable against higher tiers than Derfflinger.

As a German battlecruiser, Mackensen features thick armor belts covering her entire side and extending along the lower half of her bow and some of her stern. Her upper bow and most of her stern are only 25mm thick, leaving her vulnerable to most cruiser HE and overmatch from larger battleship caliber AP. But it offers much more protection against same tier battleships than Derfflinger’s 19mm. However, Mackensen lacks the turtleback of the preceding battlecruisers and most German battleships. As such, she can be a difficult ship to kill quickly when properly angled, but she is much more vulnerable when caught broadside.

consumable. The significantly faster cooldown leaves her less vulnerable to full duration fires or floods after repairing, but the limited charges can run out quickly in long engagements if not used selectively.

consumable, an unusual feature among battleships and the first at Tier VI. Due to her weaker torpedo protection, the advantage it provides in spotting and dodging enemy torpedoes can be significant. Players should note that Mackensen uses the cruiser version as found on VI Nurnberg and VII Yorck, rather than the one found on the main battleship line starting at VIII Bismarck.

In addition to the durability provided by her thick belt, Mackensen’s survivability is further enhanced by her best in tier concealment. When fully specced for concealment, her detection can even rival several cruisers in her matchmaking range. That allows her to sneak up on unsuspecting broadside targets when possible, as well as go dark if she starts to take too much focus fire.

If Mackensen’s speed and concealment are some of her strongest points, her anti-aircraft defenses are easily her worst. Even compared to other stock hulls, her long range defenses lack substantial continuous damage and her single flak cloud does little to improve it. Her short range damage is outstanding among stock hulls and still impressive compared to upgraded hulls at her tier. But with only a 1.5km range, it offers almost no protection against a strike — most of her plane kills will come after they’ve already launched their attack.

If a carrier is present in the battle, Mackensen will need to stick closer to friendly AA and be more cautious on flanks. On top of her weak AA defenses, she also has one of the highest air detection ranges of all Tier VI battleships. With little ability to protect herself, she’s an attractive target for carriers and very easy to spot from the air.

While the preceding battlecruisers could still fill a battleship role, Mackensen plays more like an oversized cruiser. Players should use her speed and concealment to position on a flank at the start of the battle, and react quickly as the battle evolves. Her thick belt armor and Fast Damage Control Team

allow her to be aggressive when needed while still being difficult to kill quickly. But she should pick her fights with care and avoid leading pushes herself.

Availability of researchable upgrades for Mackensen is as follows:

Tier VII battlecruiser Prinz Heinrich is researched directly off the stock (A) hull. While the extra range of the upgraded fire control system can be helpful when bottom tier, her stock range is still sufficient for most same and top tier battles.

The recommended upgrades for Mackensen are as follows:

To get the most out of Mackensen’s secondaries, Secondary Battery Modification 1

For players with large coal reserves, the Hydroacoustic Search Modification 1

in Slot 2 is available to further boost Mackensen’s hydro duration. But for those short on coal, it’s recommended to save that upgrade for the higher tiers.

Mackensen can equip the following consumables:

Signals that focus on survivability are strongly encouraged.

Ships of Germany
Battleships
Retrieved from "http://wiki.wargaming.net/en/index.php?title=Ship:Mackensen&oldid=322915"
Categories:
Your location:
To log in, select the region where your account is registered
CIS Europe North America Asia
Or use Microsoft Login to enter WoT XBOX ecosystem
Log in