The maps in World of Warships are all fairly unique and interesting. Some maps are restrictive to certain tiers, whilst others are not. Map sizes vary from as small as 24km x 24km to as large as 48km x 48km. An interesting point of note, is the relative symmetry of the maps in World of Warships. In some cases the axis of symmetry passes through the bases, whiles in others it sits in the middle of the map. In either case, most of the maps in World of Warships are quite symmetrical in nature. Also note that maps are not in scale with the ships. The ships are roughly 2 times larger than they should be, or rather the map is 2 times smaller than it should be. This was done in order to condense gameplay time to avoid long matches in which players would get bored.

The maps in World of Warships can be divided currently into 2 types - Regular and Special. Regular maps are the ones most familiar, as they feature throughout the game as you play battles. Special maps on the other hand only appear at certain times, or on special occasions. Currently the only special map is the Tutorial map, which teaches new players the ins and outs of World of Warships, however there are tournament variations of certain maps within the game files. These tournament maps include: New Dawn, Big Race, North and Fault Line. This list however is subject to change. 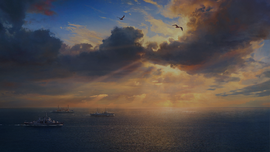 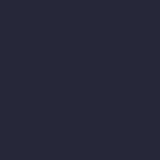 As its name suggest, Ocean is one of the most simple maps in the game. A standard 36km x 36km map, Ocean features no terrain making it difficult for certain classes of ships to utilize some of their advantages. This map however does allow for Battleships with range to use their advantage, as well as well camouflaged destroyers. Aircraft can reign supreme with a lack of cover available for enemy ships. Ocean can be seen in both a standard battle and encounter mode configuration. 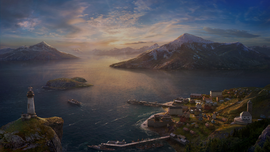 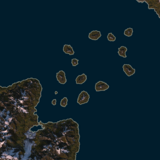 Big Race is a 30km x 30km map that is only available in the standard battle and encounter game modes, and features numerous large islands in a symmetrical layout. The islands feature large enough mountains which can provide cover from short and long ranged fire. It is unavailable for higher tier matches. The action on this map typically occurs around the North-East and South-West corners, with intermittent destroyer battles in the center. It is a fairly balanced map for both sides due to its highly symmetrical nature. Do note however, that as the opposing teams spawn so close together, some ships will be able to shoot each other within a short period of time. 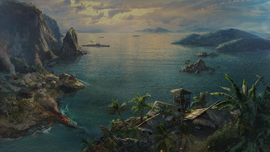 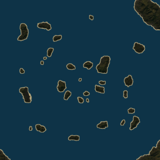 New Dawn is another 36km x 36km map; however, its visibility is restricted to the lower tiers. This map typically has action occur in the North-West and South East quadrants, with the spawnpoints/bases being in the North-East and South-West. The map is full of numerous terrain features such as islands that can be used to obscure visibility and reduce the chances of getting hit. It does however have a lot of islands low enough for good players to shoot over and hit you with plunging fire, so pick your islands carefully. This map can be seen in both the Domination and Standard battle modes. 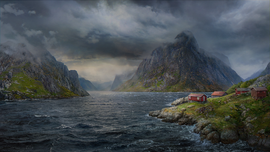 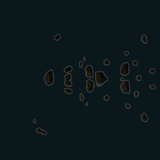 Not initially available when a player begins, North starts making its first appearances once the player reaches the middle tiers of the game (Or purchases a premium ship of sufficient tier). North is one of the larger maps in the game, with a 48km x 48km map dimension. North features a wide open area of sea in the west, island congestion in the middle, and a somewhat hybrid area of restricted open sea to the east. North is played in both the standard and domination modes, with most of the action typically occuring to the far east and far west whilst destroyers and some cruisers skirmish in the middle. 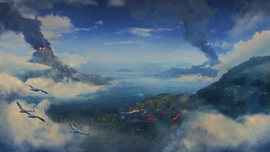 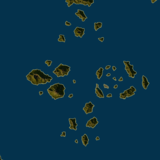 Bees to Honey is the former name for the map now known as Hotspot, which is a 48km x 48km map only seen by the higher half of the tiers. It is a map that is sometimes not welcomed by players due to its unique nature of spawns. On Hotspot, the teams spawn is split in half with each half of the same team diagonally across from one another. This can work out good for a team if their entire force all push one direction to link up and crush the force in between, but can likewise end in disaster if a coordinated enemy performs the same strategy. This map can be featured on 2 versions of Domination (3 cap and 5 cap), as well as in the encounter mode. 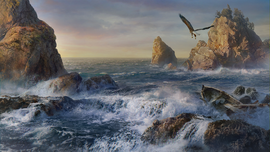 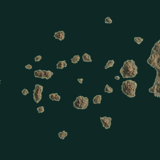 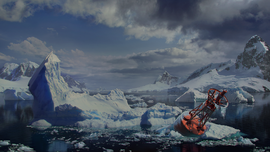 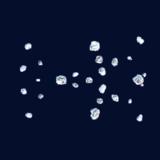 Only available in games with a top tier of IX or X, Islands of Ice is one of the larger maps, with a combination of open spaces and congested channels. It also is one of the few maps to feature "encounter mode," with only a single cap point in the center of the map, providing a different play style than the standard two cap and Domination maps. Battleships will often engage in long range gun duels straight out of spawn, while destroyers will make for the narrow passages to capture points in Domination and launch torpedo attacks at the battle lines that form. 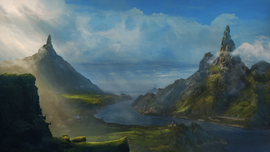 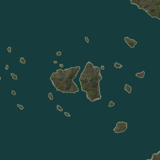 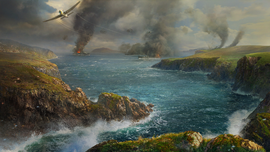 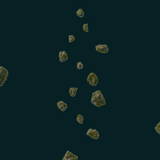 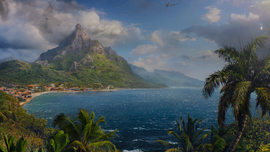 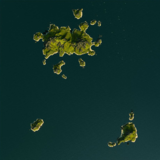 Retrieved from "http://wiki.wargaming.net/en/index.php?title=Ship:Maps&oldid=227562"
Categories:
Your location:
To log in, select the region where your account is registered
CIS Europe North America Asia Republic of Korea
Or use Microsoft Login to enter WoT XBOX ecosystem
Log in