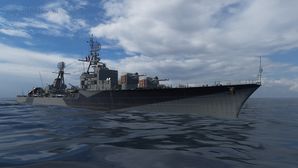 A variant of the 3,000-ton reconnaissance project developed between 1939 and 1940, armed with post-World War II weapons, including a multi-purpose main battery.

Marceau is the coal alternative to Kleber. She shares Kleber's hull but her differences warrant a completely different play style. She mounts the 127mm guns of Colbert, at the tradeoff of reduced HE alpha damage and slower shell ballistics in exchange for higher AP alpha. She also enjoys a concealment advantage over Kleber, and has longer range torpedoes.

Marceau differs from her sister Kleber in many ways, primarily her guns, which boast the highest DPM of any tier 10 destroyer. However, in exchange for the powerful guns, she still suffers from the lack of a smokescreen consumable, and her torpedoes are rather underwhelming due to their poor speed, mediocre range, and slow reload.

This leads to a destroyer hunter type role, where she contests caps and runs down enemy destroyers with her extremely high speeds in order to make up for her poor concealment, while gunning them down with her powerful guns before quickly turning away and going dark to search for her next prey. Marceau is a poor counter to cruisers due to her poor ballistics, and her limited range means that unless the player takes upgrades, she must venture dangerously close to battleships to deal damage to them with her guns. Overall, Marceau is best played as a destroyer hunter or as a battleship farmer, while also making a mediocre torpedo boat on the side.

For those more acquainted with the style of gunboat play, a different play style can be taken on by taking full advantage of Marceau's speed and damage output. At first, Marceau may hang back, using her speed and handling to fire at enemy battleships and cruisers with more sluggish shells that she can dodge. As the game progresses however, she can get closer to the battlefield, beginning to exhibit control of capture zones and hunt down enemy destroyers, as well as even rushing down battleships if the situation calls for it.

Overall this leads to a play style that revolves around her powerful guns, but is limited by her short range and poor ballistics. Marceau is a powerful destroyer with the potential to turn around games in the right hands.

As a special ship, Marceau has no module upgrades to research.

The recommended upgrades for Marceau are as follows:

As a premium ship, Marceau comes with Default permanent camouflage and a set of permanent combat bonuses.

Like many other destroyers, Marceau is prone to detonation. The Juliet Charlie signal is highly recommended.

It's unlikely the French would have given this design the name Marceau as it conflicts with a Type 1936A (Mob) destroyer which had the same name and was in French Navy service from 1946 to 1958.

Ships of France
Destroyers
Retrieved from "http://wiki.wargaming.net/en/index.php?title=Ship:Marceau&oldid=323817"
Categories:
Your location:
To log in, select the region where your account is registered
CIS Europe North America Asia
Or use Microsoft Login to enter WoT XBOX ecosystem
Log in