Each ship has a certain combat tier assigned to it. It determines the maximum level of enemy and ally ships that can be encountered in the battle.

The information below is current as of patch 0.5.0 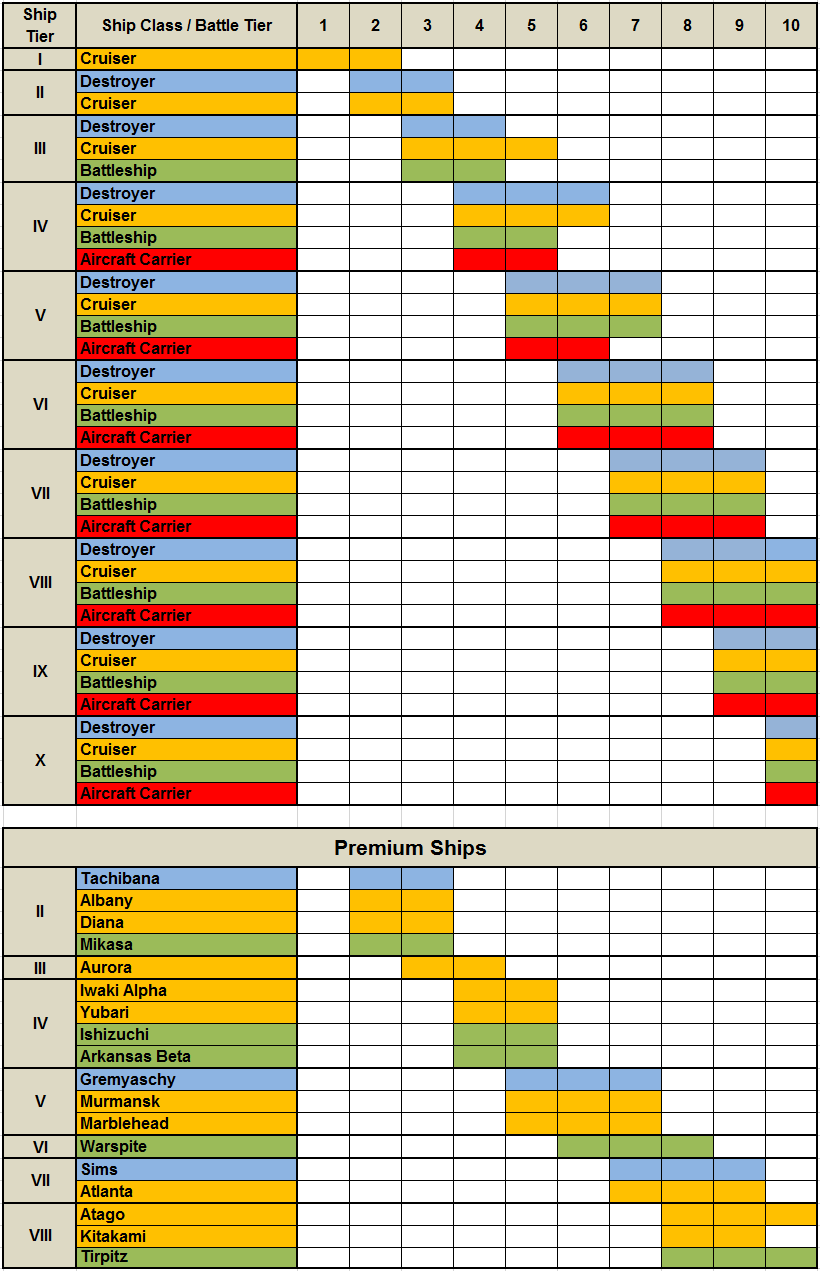 Divisions of up to three ships can be created. Currently divisions can only have one carrier (and a random team can have no more than two carriers).

Matchmaker treats all the ships in the platoon as having the highest present tier; so if, for example, a tier 3 and a tier 7 ships division together, matchmaker views both of them as tier seven ships and will assign them to battle accordingly. For that reason, it is never a good reason to platoon with ships that vastly differ in tiers (so-called "fail divisions") -- you will weaken your team, and draw the wrath of your teammates.

A ship is spotted when another enemy ship or aircraft gets close enough to detect it. This mainly involves two sets of values.

The first set of values is Detection range, which is divided into two categories

The second set of values is View range, which is also doubles as a ship's render range. It is indicated by the outer limit of the grey cone on the player's minimap in battle. Any ship outside of this range can not be detected by the player, while any allied ships and spotted enemy ships outside of it will not be drawn on the player's screen but will be displayed on the player's minimap as outlined icons. In general, the taller the ship the higher its view range will be. Therefore battleships tend to have very long view ranges (in excess of over 20 km), while destroyers usually have shorter view ranges than other ship classes.

The battleship can not detect either the destroyer or cruiser even though the battleship's view range encompasses both of them because their distance to the battleship is larger than their respective detectability range.

There are a few factors that can affect spotting:

Torpedoes are detected at different ranges according to its type, the values are the same for both surface and air detection. The consumable Hydroacoustic Search can help detect torpedoes by providing a flat proximity spotting range that is higher than the range the torpedoes are normally detected for a limited duration. Once a torpedo has been spotted, it will remain spotted for the duration of its run.

Retrieved from "http://wiki.wargaming.net/en/index.php?title=Ship:Matchmaking&oldid=227557"
Your location:
To log in, select the region where your account is registered
CIS Europe North America Asia Republic of Korea
Or use Microsoft Login to enter WoT XBOX ecosystem
Log in