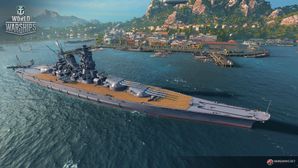 A Yamato-class battleship, Yamato’s only sister ship to be commissioned. Just like Yamato, Musashi was the biggest warship of World War II. Upon completion, and in contrast to her subsequently modernized sister ship, she had more powerful secondary battery guns, but weaker AA defenses.

The Musashi is Yamato's sister ship. The two share many commonalities, as can be expected. However, Musashi is a tier lower than her sister ship and somewhat weaker as a result. She retains the class's fearsome 18.1 inch guns, but sacrifices some general accuracy to do so. Her AA suite is also lacking compared to powerhouses like the Missouri, Iowa, or Friedrich der Große.

Everything considered, if you have played the Yamato, you know what to expect with the Musashi. Both share features such as their armor layout, health pool, stealth (or lack thereof), and speed. The two play very similarly, and overall feel quite comparable. That is not to say that they are entirely similar, however. Like was previously stated, Musashi sacrifices two main things for her down-tiering. First and foremost, she takes a massive hit to her Anti-Aircraft suite. It would not be an exaggeration to say that the single largest threat to any Musashi captain will be the enemy aircraft carrier, as they can strike with near impunity. The severity of this weakness is somewhat mitigated by her astoundingly good torpedo belt—Musashi has the joint best protection against torpedoes in the game, along with the Yamato. Captains should still keep this downfall in mind, however, as positioning themselves next to a ship with strong AA could mean the difference between sinking or staying afloat while a carrier is in play.

One of Yamato's biggest strengths lie in her guns. This is still true with the Musashi, but with one major difference. While the Yamato has the highest sigma value in the game at 2.1, Musashi only has a 1.8 value. Sigma as a value only affects the shell groupings of a volley, causing them to trend towards being closer together as the value grows higher. Simply put, the higher the sigma, the tighter the shell groupings. There will always be outliers where shells go nowhere near a targeted ship, and even a ship with cataclysmically low sigma can have good accuracy as long as the dispersion value is similarly good. So, to put all this into context, Musashi is not inaccurate. She has the same dispersion value as her higher tiered sister, the Yamato. However, Musashi's shell groupings simply won't be as tight, on average.

Other than these two things, Musashi also has a very high and easy to hit citadel. Captains should avoid tricky situations, and avail to angle towards enemy ships at all times. Don't get caught up in the ship's expansive main battery range either, as her guns become most effective near the 15 km mark. Try not to get into a brawling situations either, due to the combined weaknesses of Musashi's high citadel and horrid main battery traverse speed. Any Yamato veteran should be familiar with these things.

What a captain should take away from all this is that the Musashi presents a weaker, downtiered Yamato. They play the same for the most part, sharing the same weaknesses and strengths. She is not a radical departure from general battleship play, and should be very comfortable to anyone who enjoys Yamato.

The recommended upgrades for Musashi are as follows:

) is recommended to provide additional survivability to the main battery, but players who desire to specialize in the secondary or anti-aircraft armament should choose Auxiliary Armaments Modification 1 (

) is recommended because it reduces shell dispersion of the main and secondary armaments. To increase the effectiveness of the anti-aircraft armament, mount AA Guns Modification 2 (

Key skills for all Musashi commanders include Priority Target, Expert Marksman, and Superintendent.

Musashi can equip the following consumables:

) are recommended, as Musashi will often be detected and drawing fire. Captains can choose between the Spotting Aircraft (

) depending on personal preferences.

Musashi (武蔵), named after the former Japanese province, was one of two Yamato-class battleships built for the Imperial Japanese Navy (IJN), beginning in the late 1930s. The Yamato-class ships were the heaviest and most powerfully armed battleships ever constructed, displacing almost 72,000 long tons (73,000 t) fully loaded and armed with nine 46-centimetre (18.1 in) main guns. Their secondary armament consisted of four 15.5-centimetre (6.1 in) triple-gun turrets formerly used by the Mogami-class cruisers. They were equipped with six or seven floatplanes to conduct reconnaissance.
Commissioned in mid-1942, Musashi was modified to serve as the flagship of the Combined Fleet, and spent the rest of the year working up. The ship was transferred to Truk in early 1943 and sortied several times that year with the fleet in unsuccessful searches for American forces. She was used to transfer forces and equipment between Japan and various occupied islands several times in 1944. Torpedoed in early 1944 by an American submarine, Musashi was forced to return to Japan for repairs, during which the navy greatly augmented her anti-aircraft armament. She was present during the Battle of the Philippine Sea in June, but did not come in contact with American surface forces. Musashi was sunk by an estimated 19 torpedo and 17 bomb hits from American carrier-based aircraft on 24 October 1944 during the Battle of Leyte Gulf. Over half of her crew was rescued. Her wreck was located in March 2015 by Microsoft co-founder Paul Allen and his team of researchers.

Ships of Japan
Battleships
Retrieved from "http://wiki.wargaming.net/en/index.php?title=Ship:Musashi&oldid=269610"
Categories:
Your location:
To log in, select the region where your account is registered
CIS Europe North America Asia Republic of Korea
Or use Microsoft Login to enter WoT XBOX ecosystem
Log in