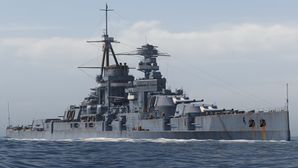 Pyotr Velikiy represents a major shift in the Russian Battleship tech tree, from the slower moving dreadnought-style warships of Knyaz Suvorov and Gangut, to a "semi - battlecruiser" style of game play. Commanders who have taken the helm of battleships such as Kongo will find her to be quite similar and comfortable to play in. Indeed, she has a striking resemblance to the Japanese battlecruiser, including her layout of eight 14-inch guns in four dual-mount turrets, poor handling characteristics, and excellent armor when angled or bow on. However, that is where the similarities end. Pyotr Velikiy excels at medium to short range combat, as is dictated by her rather short main battery firing range of just 16 kilometers when fully upgraded. Her accuracy becomes more lethal the closer she gets, while her slightly slower than average shell speed means that she won't over penetrate on most cruisers at this tier. Unfortunately, this does not set her up as a brawler. Her 33 second reload is behind most Battleships at her tier by a good 3 to 5 seconds, and gives up 7 seconds to the German König (though her guns are larger). Also, she suffers from exceptionally poor handling characteristics, compounding upon the issue of her above water citadel, which can easily be punished if she shows broadside.

Overall, Pyotr Velikiy brings a slightly different taste to the typical battleship flavor at her tier, mixing both aspects of battlecruisers and traditional battleships, with a slight hint of cruiser in the middle. Treat her as such, and she will reward you handsomely.

Availability of researchable upgrades for Pyotr Velikiy is as follows:

Since it's not wise to get close enough to make a Secondaries Mod worthwhile, and AA is not strong enough to make an AA Mod of much use, the only real alternative is Main Battery Modification 2

The captain must keep in mind that while his damage control team is quite good, it can respond to a limited number of incidents before becoming exhausted.

Under the Naval Warfare Development Program of 1909-1919, worked out by the Naval General Staff (MGSh) in the second half of 1907, in addition to the eight battleships, it was proposed that four more ships should be built with the intention of using T-crossing tactics against an enemy fleet. On August 18, 1907, MGSh came up with the principal characteristics for the future "armored cruiser", which was expected to run at a speed of 25 knots; carry eight 305 mm guns placed in four turrets and sixteen 102 mm guns; and have a main armor belt of at least 152 mm. By 1909, these characteristics had been slightly adjusted upwards, but when MGSh's senior ranks paid a visit to German shipyards and learned about the all-new battlecruisers under construction at that time, an image of the necessary performance characteristics started to finally take shape. The ship should have a speed of at least 28 knots, carry ten to twelve 305 mm or 356 mm guns, and have an armor belt of at least 190 mm. On August 26, 1911 six Russian and seventeen foreign shipyards received an invitation from the Navy Ministry to join a competition to create the best outline design for an "armored cruiser for the Baltic Sea." Outline designs were submitted by John Brown; Vickers and William Beardmore (Great Britain); Vulkan and Blohm und Voss (Germany), who submitted theirs jointly with Putilov Works; and by the national Admiralty, Baltic and Putilov Works. On May 12, 1912, the results were summed up, with the winner being outline design No.6 of the Admiralty Shipyard, which was later used as the basis for battlecruiser Izmail. The Admiralty design broadly resembled a smaller version of Izmail, with the same layout but twin instead of triple 356 mm gun turrets.

Ships of U.S.S.R.
Battleships
Retrieved from "http://wiki.wargaming.net/en/index.php?title=Ship:Pyotr_Velikiy&oldid=319772"
Categories:
Your location:
To log in, select the region where your account is registered
CIS Europe North America Asia
Or use Microsoft Login to enter WoT XBOX ecosystem
Log in