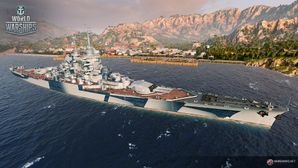 Patrie is researched off République at a cost of 1 XP.

). This gives Republique an even better rate of fire, but at the cost of a significant range debuff.

République is better built for survivability and main battery efficiency. While possible, a secondary-focused build is not advised due to Republique's poor armor protection.

Ships of France
Battleships
Retrieved from "http://wiki.wargaming.net/en/index.php?title=Ship:République&oldid=323203"
Categories:
Your location:
To log in, select the region where your account is registered
CIS Europe North America Asia
Or use Microsoft Login to enter WoT XBOX ecosystem
Log in