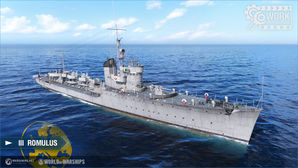 A Spica-class destroyer built for the Italian Navy and transferred to Sweden in 1940. The ship was notable for her compact dimensions and the peculiar arrangement of her torpedo tubes.

Romulus is an improvement from Tatra, as it has one more main gun and two more torpedo tubes. The tubes have a rather odd arrangement - the first tube has two whereas the second has four, the only time when a Tier II destroyer has a quadruple launcher. That said, the torpedoes do not deal much damage to enemies, which is a trait of European destroyers. As with most destroyers at its tier, it has great speed and rudder shift times. When playing Romulus, it is important to know her weaknesses in a destroyer to avoid mistakes - these include her poor torpedo firing angles and slow turret rotation.

Players who wish to spend doubloons can equip Romulus with Type XX camouflage that lowers her detection radius, reduces the accuracy of incoming shells, reduces her repair costs, and increases the amount of experience she earns.

Ships of Europe
Destroyers
Retrieved from "http://wiki.wargaming.net/en/index.php?title=Ship:Romulus&oldid=305208"
Categories:
Your location:
To log in, select the region where your account is registered
CIS Europe North America Asia Republic of Korea
Or use Microsoft Login to enter WoT XBOX ecosystem
Log in