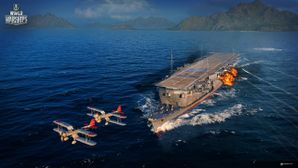 Ryujo is a potent carrier due to its supply of reserve aircraft, choice between air superiority and strike loadouts, and access to manual attack options at tier 6. Ryujo is a light carrier but with a larger hangar capacity than its counterpart Independence. She uses the exact same torpedo bombers as Zuiho, and has access to the tier 6 D3A1 "Val" dive bombers and tier 6 A6M2 "Zero" fighters.

This is a suggested upgrade path:

Ryujo uses the standard IJN CV captain skill setup. Emphasis should be on skills that boost fighter and bomber effectiveness and AA protection. Aircraft Servicing Expert, Torpedo Acceleration, and Air Supremacy are "must have" skills. Dogfighting Expert is also useful if Ryujo faces a higher tier carrier, and the bonus to ammunition allows her fighters to remain airborne longer before returning to rearm.

For AA defense, Ryujo has large-caliber 127mm guns that benefit greatly from Manual Fire Control for AA Armament. Basic Firing Training is also a good choice to boost all AA guns' DPS by 20%. While Ryujo's AA DPS output is not sufficient to wipe out entire squadrons, it can knock out a few planes and, in combination with maneuvering, can help avoid taking serious damage.

Evasive Maneuvers is not recommended because it only affects bombers that have dropped their payload and are returning to the carrier.

Any skills that are related to an enemy vessel firing on your carrier are not useful, as the cost-benefit of investing in survivability skills is not worth the minimal benefit they offer. Ryujo has a low HP pool and is large and unarmored, and will not survive an attack by any ship larger than a destroyer. Ryujo captains must position their ship near friendlies and far back from the enemy fleet. Concealment Expert may be taken to further reduce detection range if the captain so desires.

As a carrier at Tier VI, Ryujo has access to only Damage Control Party.

Players who wish to spend doubloons can equip Ryujo with Type 16 camouflage that lowers her detection radius, reduces the accuracy of incoming shells, and increases the amount of experience she earns.

As a carrier, Ryujo can only mount at most four signals at a time and has no risk of detonating. Players should mount Equal Speed Charlie London (for faster XP grinding / increased XP gain per battle), Zulu Hotel (when coupled with Equal Speed Charlie London greatly helps increase commander (re)training), and, for the last two / pair, November Echo Setteseven (for better bomber self-defense against fighters) and Juliet Whiskey Unaone (to have a better chance at causing flooding and dealing damage via flooding). However, the last two recommended signal flags are not highly recommended if the player wishes to conserve the signal for later tiers.

Ships of Japan
Aircraft Carriers
Retrieved from "http://wiki.wargaming.net/en/index.php?title=Ship:Ryujo&oldid=251638"
Categories:
Your location:
To log in, select the region where your account is registered
CIS Europe North America Asia Republic of Korea
Or use Microsoft Login to enter WoT XBOX ecosystem
Log in