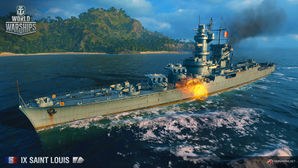 A heavy cruiser project included in the last shipbuilding program during wartime. The ship was equal to ships of the preceding project but the absence of treaty restrictions allowed her to have a larger displacement and reinforced AA capabilities.

Saint-Louis is a strong Tier IX cruiser. She is a direct upgrade in nearly all respects from Charles Martel.

She keeps the 3x3 203mm main armament that is a feature of the previous French heavy cruisers. Firepower is similar to the Charles Martel, improving on the already excellent range and gaining the option to improve the rate of fire using the new, final upgrade slot.

Most improvements, however, are defensive. While her rudder shift and turning radius are a little poorer than her predecessor, Saint-Louis does pick up half a knot of speed, 2,900 more hit points, and most crucially, a Repair Party, allowing her to play more aggressively with the promise of being able to recover some health later.

Her anti-aircraft armament is also considerably reinforced; though not on the level of ships like Neptune. Notably, her long-range AA is fairly weak with but three flak bursts per salvo of her 100mm batteries, and only modest burst damage. The 'Expert AA Marksman' skill can help, as can mounting Defensive AA Fire

together. Fortunately, her medium and short range AA batteries are somewhat stronger.

consumable, may seem underwhelming at first, but it can become a very useful tool. With Engine Boost activated, Saint-Louis can juke back and forth very rapidly, dodging incoming shells and frustrating enemy ships. Peeking in and out of cover to take shots with Engine Boost active means that Saint-Louis spends as little time as possible vulnerable to the enemy while still being able to do tons of damage. This is further exemplified with the addition of her last consumable, the Main Battery Reload Booster

, which cuts the reload of her main guns in half to allow for rapid dispensing of damage when enemies least expect it.

However, there is one major weakness with Saint-Louis. The armor, like the rest of the French cruisers, is poor. Saint-Louis requires the player to keep attention to the enemy ships at all times, and the slightest of mistakes in positioning may be heavily punished with multiple citadels. Saint-Louis has a fairly high citadel, so any broadside presented may be the last broadside presented in the battle. This ship has most of her guns towards the front, keeping 2/3 of her firepower when bow-on, but she will still take massive damage from battleship Armor Piercing shells while bow-on. Saint-Louis will not last long under sustained heavy fire, so positioning and knowing when to engage in fights is of utmost importance.

Research Hull (B) first, then research the upgraded Gun Fire Control System. Then start saving up for Henri IV.

A full AA build is possible, and may prove desirable for escort duties when situations dictate regular encounters with carrier squadrons.

. However, if the player has the special Engine Boost Modification 1

, mount that instead. This modification takes the French cruisers' specialty, the Engine Boost consumable, and increases its duration by +40%.

. Saint-Louis' will be moving among the battlefield a lot, and improving her turret traverse will allow her guns to have an easier time staying on target as she makes evasive maneuvers.

is also a possibility for players who want to make the most out of the Engine Boost and give the ship incredible acceleration.

. The additional stealth is necessary for a lightly armored cruiser and will aid in getting to positions without getting spotted. Alternatively, Steering Gears Modification 2

can be used for maximum maneuverability.

For Upgrade Slot 6, there are several different modules to take depending on ship build. Main Battery Modification 3

may be taken for players who prefer to engage from long ranges.

Last Stand is critical to protect the Engine and Steering, especially if Engine Room Protection is not taken in Upgrade Slot 2.

Saint-Louis can equip the following consumables:

The Saint-Louis class was an un-built class of heavy cruiser drawn up on the eve of World War II and was the last heavy cruiser designed for the Marine Nationale. Previously known as the "C5" cruiser, the Saint-Louis class was conceived in 1939 as a replacement to the aging Duguay-Trouin class, and was based off of the previous Algérie class. Due to the expiration of the Washington Naval Treaty, French designers were no longer limited by the treaty's 10,000 ton maximum displacement limit so they were able to design a ship that was larger, faster, better protected, and, through the introduction of a semi-automatic loading system, much more heavily armed. In the end, the final design exceeded her predecessor's size considerably: weighing in at 15,000 tons normally, and nearly 19,000 tons at full load. The design was approved and accepted by the navy on 1 April 1940.

Six ships were planned to be built in two, three ship batches. The first batch was to be in service by 1944 to coincide with the planned retirement of the Duguay-Trouin class while the second batch would have entered service by 1946. Contrary to almost every other un-built warship class, all six members of the Saint-Louis class received names in advance of construction. The names and planned construction dates were as follows:

In the end, the invasion of France by Nazi Germany stopped all discussion about the class, and the subsequent occupation of France resulted in the project's abandonment.

Ships of France
Cruisers
Retrieved from "http://wiki.wargaming.net/en/index.php?title=Ship:Saint-Louis&oldid=318489"
Categories:
Your location:
To log in, select the region where your account is registered
CIS Europe North America Asia
Or use Microsoft Login to enter WoT XBOX ecosystem
Log in