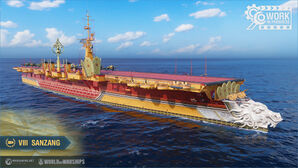 Sanzang is a Buddhist monk, scientist, philosopher, traveler, and translator. He is not only an eminent person, but also the main character from "Journey to the West", a novel by Wu Cheng'en.

Sanzang was first released in "Lunar New Year" containers on 20 Jan 2021 on all servers.

As the first Pan-Asian premium aircraft carrier, Sanzang is not a new concept, but is actually a clone of the USN Tier VIII premium Saipan, except for the permanent camouflage. She plays exactly the same as Saipan and shares her strengths and weaknesses. Players who are comfortable with the play style of Saipan should not have any problem playing with Sanzang.

Sanzang shares the same Tiny Tim rockets, stock torpedoes and upgraded HE bombs as the Midway, but has only 6 planes for each plane type per squadron and only 9 of each plane type on deck at the start of the game. On top of that, the plane restoration time is more than 2 minutes, sharing the title of having the worst plane restoration time with Saipan. Like Midway, the HE bombs and rockets have very high alpha damage, but have annoyingly large aiming circles.

For a better and more in-depth review, here is the link to the Saipan page.

As a premium ship, Sanzang doesn't have any upgrades to research.

Sanzang should focus heavily on plane survivability despite the large plane hit point pools (for tier 8) due to the long plane restoration time.

The recommended upgrades for Sanzang are as follows:

Captains should focus on plane survivability despite the generous HP pools of the planes due to the long plane restoration time. Air Supremacy, Improved Engines, Aircraft Armor, Survivability Expert, Sight Stabilisation, Enhanced Aircraft Armor and Proximity Fuse are recommended for a 19 point commander, with special emphasis on the defense skills. However, do note that the distribution of skill points is a matter of personal choice. Captains should choose different skills for Sanzang if they feel more comfortable with that playstyle.

Sanzang can equip the following consumables:

All consumables on the carrier itself are activated at need and cannot be activated manually.

As a premium ship, Sanzang comes with Default permanent camouflage and a set of permanent combat bonuses.

India X-Ray, Juliet Whiskey Unaone and Victor Lima are the most effective signals for Sanzang. November Echo Setteseven will help to increase the power of Sanzang's horrible AAA. As an aircraft carrier, Sanzang has no risk of detonating so Juliet Charlie would just be wasted.

Ships of Pan-Asia
Aircraft Carriers
Retrieved from "http://wiki.wargaming.net/en/index.php?title=Ship:Sanzang&oldid=323826"
Categories:
Your location:
To log in, select the region where your account is registered
CIS Europe North America Asia
Or use Microsoft Login to enter WoT XBOX ecosystem
Log in