This scenario has the friendly task force defending a base against several waves of attackers.

This scenario has the friendly task force rescuing captured Allied transport ships and escorting them to safety.

This scenario has the friendly task force raiding an enemy base, then making their escape.

This scenario has the friendly task force find and escort the heavily damaged aircraft carrier, Raptor, out of the combat zone. 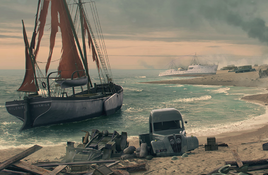 Retrieved from "http://wiki.wargaming.net/en/index.php?title=Ship:Scenarios&oldid=268715"
Category:
Your location:
To log in, select the region where your account is registered
CIS Europe North America Asia Republic of Korea
Or use Microsoft Login to enter WoT XBOX ecosystem
Log in