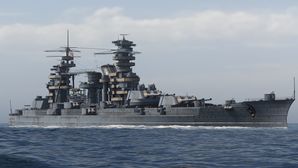 A high-speed battleship project, armed with 406 mm guns that were developed right before the beginning of World War I. Her advantages included well-designed armor protection and a strong secondary battery.

The recommended upgrades for Sinop are as follows:

Sinop can equip the following consumables:

The captain must be mindful that while his damage control team is very efficient, it can handle a limited number of incidents before becoming exhausted. 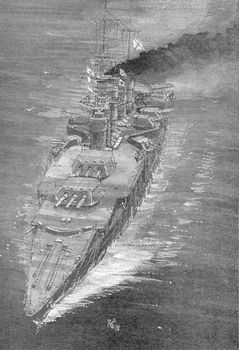 Sinop is derived from a a 1917 naval design for a Black Sea battleship. The design was created by one of the best Russian engineers, V.P. Kostenko. It was semi-official and none of the documents were found from the navy requesting it. It had no chance of ever being built in the conditions of 1916-17 Russia, but shows a Russian attempt at the post-Jutland battleship. The info on it is fragmentary due to the nature of the situation in 1917-18 in the South of Russia.

The ship's name is an homage to the Battle of Sinop (or Battle of Sinope), a Russian naval victory over the Ottoman Empire during the Crimean War that took place on 30 November 1853 at Sinop, a sea port in northern Anatolia where a squadron of Imperial Russian warships struck and defeated a squadron of Ottoman ships anchored in the harbor. The battle was a contributing factor to bringing France and Britain into the conflict. It is commemorated in Russia as a Day of Military Honour.

Ships of U.S.S.R.
Battleships
Retrieved from "http://wiki.wargaming.net/en/index.php?title=Ship:Sinop&oldid=323820"
Categories:
Your location:
To log in, select the region where your account is registered
CIS Europe North America Asia
Or use Microsoft Login to enter WoT XBOX ecosystem
Log in